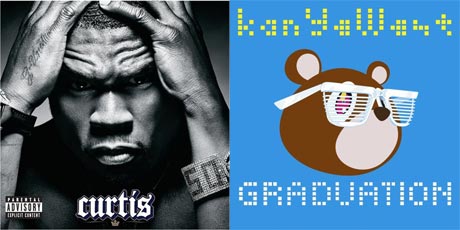 Capitan Kirk vs. Capitan Picard, Ghandi vs Buddha, Bill Gates vs Steve Jobs  all ones of the greatest one on one feuds in history, but such a list couldn’t go on without adding the latest  Kanye vs Fifty. No need to detail the skirmish between the two, the important thing is the results are in and Fifty isn’t looking to good. This week Kanye’s third album Graduation toped the Billboard top 100 with a whooping 958,000 in sales, while 50 Cent and Curtis managed to achieve “only” 692,000. I have a feeling, though, that this isn’t the end of 50’s career, far from it, maybe just the tip of the iceberg.

The Billboard top 5 albums of the week ending September 16: