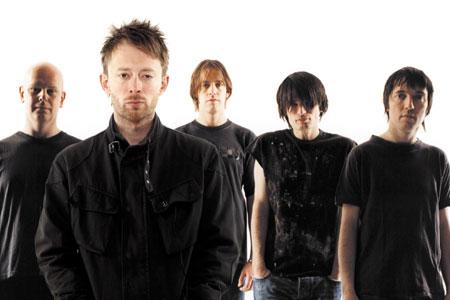 Seems like we can’t end a day without posting about [tag]Radiohead[/tag]. OK bare with us! Earlier today the band’s management announced that the In Rainbows CD release date is set to be on December 31 in the UK, via XL Records, with which the band signed a publicezed agreement for distributing their latest record in CD version, outside North America. A few hours later this peculiar post got up, on the Radiohead official blog Dead Air Space:

helo
there will be something on the box tonight
its another test
but right now we are entangled in cables
however
weather permitting
our technical experts will resolve the entanglement
itll be broadcast as a quicktime h.264 stream
if youve got a mac you could read it with quicktime player
if youve got a pc you might need to download the installer (click here to download and install)

That’s like in … 1 hour ? Whatever it is I think it can wait until tomorrow morning, I’m beat. I can speculate that they’re gonna confirmed the rumors saying they’ve signed a deal with ATO/Side One for releasing the In Rainbows CD in the US, allegedly on January 1st.

I eventually decided to stay up late and watch the whole Radiohead broadcast. To my surprise it was all worth it, as Thom Yorke’s “Harrowdown Hill” (from his solo record) mix and Radiohead’s rendition of [tag]Bjorke[/tag]’s classic “Unravel” did well to fill the gap, resulting from my lack of sleep. Bellow’s the whole broadcast from www2.radiohead.tv split into two parts: