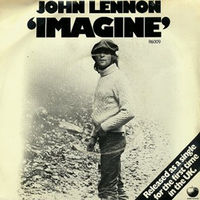 [tag]John Lennon[/tag]’s former wife Yoko Ono has given permission for one of John’s greatest song “Imagine” to be immortalized as pop art.

Imagine is a utopion themed song, that first appeared in 1971, as part of John Lennon’s album Imagine. In 2004 it was voted the third best song in the world by Rolling Stone Magazine, after “Satisfaction” by [tag]Rolling Stones[/tag] and “Like a Rolling Stone” by [tag]Bob Dylan[/tag].

The lyrics from this legendary song will be embedded in 100 copies of black canvas, in a limited edition series, with each artwork signed and numbered by the artist Air Side. The paitins will be part of the “It’s Pop It’s Art” artwork display in London’s PYMCA gallery.

For information on the event in London or regarding the purchase of one of the prints please visit the “It’s Pop It’s Art” homepage.