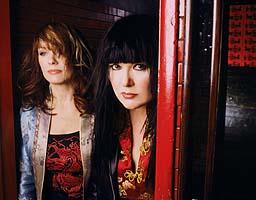 This is about the band named Heart. They are a sister act and they have been singing for three decades; sisters Ann and Nancy Wilson — the core of Seattle act Heart — have shown a knack for holding their own.

They have released anthems like “Magic Man”, “Barracuda” and “Crazy on You” in the ’70s and they have made chart-toppers of “Alone and All I Wanna Do is Make Love to You”. Their legacy is heavy. But they have not released tracks for many years. That is not counting the few tunes from Ann’s just-released first solo outing: Hope & Glory, a collection of covers (and one original) by legends like Bob Dylan, Led Zep, Neil Young and John Lennon, with cameos by Elton John, k.d. lang, Gretchen Wilson and of course, sister Nancy.

She said that “I had an idea in mind of a concept album, in a sense — an album where all the songs had a common thread, and I wanted it to be an album of songs of social conscience. As a singer, words are my favourite thing. I take on the words and really get inside them, and I got excited about picking songs I grew up with, especially during really dangerous times in our world. I wanted to see if I could get a collection of songs that related to each other, not caring what decade they came from, in order to show patterns in our society.”

The tracks are not bad but they could do better music. There are some listeners who listen to their music and they are numerous. So this sounds good.