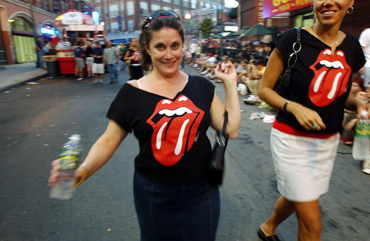 Some Rolling Stones fans wearing T-shirts with the famous logo.

Some Rolling Stones fans wearing T-shirts with the famous logo.

What’s considered by many, the first form of band marketing and branding, the original Rolling Stones‘ “The Tongue” logo art work, has been sold to a London Museum for the impressive sum of $92.500. The Tongue was designed by John Pasche in 1970 and got featured for the first time on 1971’s Sticky Fingers. In what was perhaps one of the first cases of rock brand marketing, Jagger reportedly approached the Royal College of Art in 1969 looking to commission images for the band, where he met Pasche, who happened to work for the band from 1970 to 1974.

Face to face with him, the first thing you were aware of was the size of his lips and his mouth,” Pasche said. The money was secured with the help of charity The Art Fund, a British charity group, which donated 50% of the cost. The 14-inch square colour separated, handpainted artwork comes with a colour print.

“The Rolling Stones’ Tongue is one of the first examples of a group using branding and it has become arguably the world’s most famous rock logo,” said Victoria Broakes, head of exhibitions at the Victoria and Albert Museum, where the original will hang. “We are delighted to have acquired the original artwork, especially as it was designed at the Royal College of Art right here in South Kensington by a student who used to visit the V&A’s collections for inspiration. We are very grateful for the Art Fund’s support in helping us acquire this exciting addition to our collections.”

What’s interesting to note, though, is John Pasche’s rant on the current state of record art work designs.

“It was a fantastic break for me,” says Pasche of the original commission. And one that would be unlikely to be repeated today. The current state of design for the music industry is, says Pasche “a great shame, but when you’ve got downloads who needs packaging anymore? I just feel lucky to have been part of a period when [working in the record business] was exciting.”