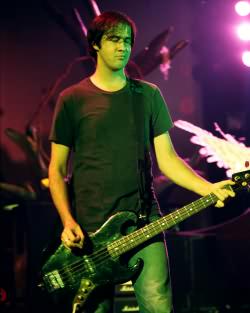 The year is 1992. Nirvana is in full swing by now, after releasing what would become one of the decade’s most influential record – “Nevermind.” Of course, back then the annual MTV Music Awars was something every artist and teen alike was looking forward to every year, but something really weird happen in ’92, which, to this day, after 16 years, still remains one of the most awkward moments in televised history.

If you remeber this, yeah, you’re really old now! Yes, it’s Krist Novoselic‘s infamous badass bass throw, during Nirvana’s performance of “Lithium.” The whole thing happend too fast and too stupid for most of us to comprehend, so now, after a very long time, Krist decided to unravel the whole story behind that wacky bass throw, in a collumn for Seattle Weakly.

I eventually made it to the food service area, where Kurt and Courtney were at a table with their newborn daughter, Frances. They told me that Axl Rose had walked by and Courtney started teasing him. She yelled, “Axl, Axl—you’re the godfather!” Upon hearing this, Axl apparently got very annoyed, walked over to Kurt, and demanded that he keep his woman in line. Kurt turned to Courtney and sarcastically asked his woman to keep in line and left it at that. Axl then split.

I’ve heard stories about this exact encounter between Cobain/Love and Rose, but I never knew when it happened (if it indeed happened), not where. Mystery solved.

Kurt wanted to play the tune “Rape Me” and was adamant about it. The MTV people were upset. We were being asked from all corners not to. I thought we should play something off Nevermind, do the gig, and leave. Easy, right? No. Kurt was very stubborn and refused to play another tune. There was quite a swirl around this issue.

I went back to the trailer and had a still-warm beer. Yuk, but I drank it anyway. To resolve the song controversy, we said we were going to do “Lithium,” but we decided among the band to pull a prank and play a few chords of “Rape Me” at the beginning.

Haha! I remember this! Millions of people thought the band was gonna break into Rape Me, but got Lithium instead. Sorta like a 90’s Rick Roll.

I was walking toward the stage and came across my now-friend and colleague, Duff McKagan. I think Duff was also under the influence. He must have heard something from Rose and had a terse word for me. I was already a little bent out of shape and instantly replied with the same sentiment. The production people grabbed me and we continued toward the stage.

Wow! Krist was really tensed at this stage and this only helped amplify the whole situation. What came after is now history. Check out the quote and watch the video bellow.

I was now even more shook up. One should take the stage in a good frame of mind, but I wasn’t there. Nirvana gets introduced, and we start playing our prank, then switch into “Lithium.” I’m plugged into some awful bass rig that’s distorting terribly. I can barely hear what I’m playing, and the tone deteriorates into an inaudible mess. Fuck it—time for the bass-toss schtick. Up it goes!!!!! I always try to get good air—I bet I hit over 25 feet, easy! But no matter how high it went, I was not on my game— the only time I’ve ever dropped it was then in front of 300 million people. Ouch! I was fine, but I faked like I was knocked out, perhaps expressing my inner torment over a taxing evening. (Maybe I was just embarrassed.)

I stumbled offstage toward the green room with my hands on my forehead. I walked straight into the bathroom and looked at a bloody forehead in the mirror. I washed my face off and put a paper towel to my head. Paramedics came in and put a little bandage on, then handed me a long medical release form to sign. Standing behind them was Brian May, the guitarist of Queen, with a glass of chilled champagne. I signed the release just to get the medics away from me so I could take a sip of Mr. May’s wonderful medicine. Ahh, yes!!! Moments later Dave Grohl burst in. He’d been looking all over for me, only to find me enjoying a calm glass of bubbly with Mr. May. It was a relief for all!

What’s even more incredible is that Novoselic still owns that very own bass guitar, though the neck is a bit bent. Probably because it hit his thick skull. Oh, memories.