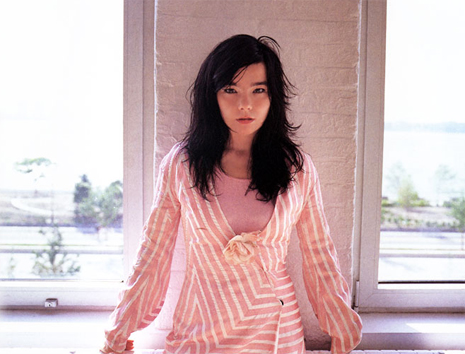 Bjork had some moderate differnces with the press this past weekend, when she reacted to an item in the The Reykjavík Grapevine crediting Valgeir Sigurðsson with writing the arrangements on her 2001 album Vespertine, although this was not the case at all. She took the liberty of correcting the respective article, offering the true full credits of the album and then went on and accuessed the journalists of sexism, not necessarily the Grapevine, but rather press in general. She accuses writers of discrediting female electronic musicians by assuming that the writing and production of much of this music is done by men. Here’s what she said, as posted on bjork.com:

“i saw in the last issue of iceland’s newspaper in english: “grapevine”, that valgeir sigurðsson was credited for having written all the instrumentals for my album vespertine. could i please offer a correction:

i have noticed last 7 years that mr. sigurðsson has often been credited for either writing or producing that album. i´d like to say that he didn´t write it or produce. he was a computer programmer for a third of it and a recording engineer for a third. The other two thirds were done by other engineers and programmers.

here is the creditlist to show you the correct crediting of vespertine. i don´t understand where that misunderstanding has come from

could be one of four options:

1 :the pop critics of this world have not totally yet worked out the difference between engineering, programming, writing and producing electronic music. visually this appears very similar. a man/woman sitting in front of a computer. not as different as for example a drummer, a brass arranger and an engineer. but these are 3 completely different jobs which journalists must start to see the difference

2: it could be that this is some degree of sexism. m.i.a. had to deal with this with the respected website pitchfork.com where they assumed that diplo had produced all of her kala album without reading any credit list or nothing , it just had to be, it couldn´t have been m.i.a. herself! it feel like still today after all these years people cannot imagine that woman can write, arrange or produce electronic music. i have had this experience many many times that the work i do on the computer gets credited to whatever male was in 10 meter radius during the job. people seem to accept that women can sing and play whatever instrument they are seen playing but they cannot program, arrange, produce, edit or write electronic music.

3: i´ll admit that one thing could confuse things: people have to use their ears and actually read the creditlist to get this information. all the music i have made: like for example string arrangements, synthbasslines or programming of electronic patterns, i never play myself live because i want to give 100% of myself into the singing i either ask the computers to play it or i get other musicians to play it. this could confuse things.

4: one thing that could have kept this misunderstanding alive is that neither me nor valgeir sigurðsson have bothered to correct it

but i am doing it now

p.s. just read that pitchfork.com credited nico muhly for the choir arrangement of “hidden place” from vespertine. also that he has done string arrangements for me. this is not true. journalists: please read the creditlist before you write your articles.”