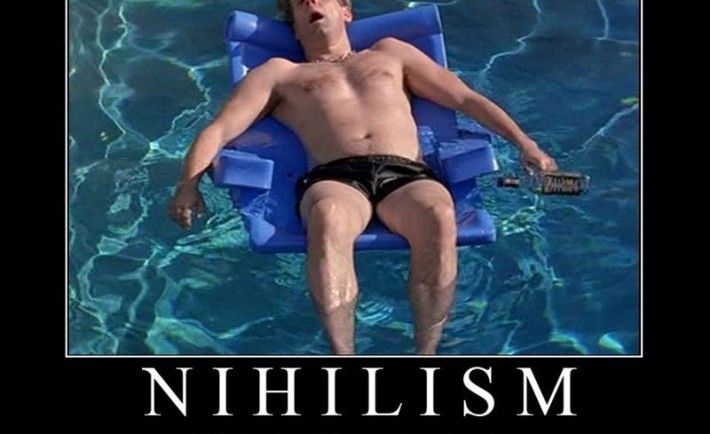 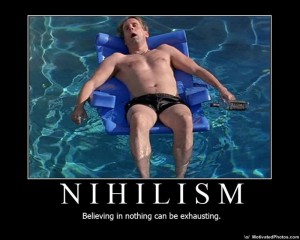 There’s a site called anus.com. It’s not what you think. It’s an acronym for American Nihilist Underground Society. I shit you not. It’s an incredibly self-indulgent and even more ridiculous take on the “philosophy” of nihilism.

Anyhow, according to the site one of the main cultures of nihilism is heavy metal. There are reviews of albums from just about every sub-genre under its umbrella. Hell, some of them might actually mean something if the prose wasn’t buried under pretentious bullshit. Take a look at a portion of the site’s review of Mayhem’s Deathcrush:

Clumsy fusions of undefined heavy metal ideas mixed with the hardcore and industrial concepts of dissonant entropy, these songs are riffs first and as development form that simple concepts of violence. Chords trudge and crash, often dissonantly [sic] through unsteady fretting of the harmonic shape, and often erode almost linearly into conclusions, but through this unsteady presentation a necrotic sense of vengeance and morbidity fills these songs.

Only about half of that paragraph means anything. Whatever salient point there is – assuming there is one – is hidden behind the subterfuge of true criticism. It’s a bunch of hokum;  it’s post-hoc interpretative nonsense that sounds quite intelligent if one doesn’t give it any thought beyond, “Wow, that’s a lot of words.”

But that’s not the reason I’ve brought this website to light. Even more absurd than the site’s (lack of) ability to properly critique a work is an article entitled “Metal Bands to Love to Hate.” And just with the title we’re in trouble.

It’s a short list and each pick has a short entry as to why “these bands are the worst depthless [sic] and pointless stuff to hit metal.” The author (who is never named) goes after fifteen bands, including Dethklok, Opeth and Cradle of Filth. Some of these bands deserve to be derided for one reason or another (Cradle and Rammstein, for example) and some are just there to make the author seem un-ironically cool with his/her choices (Baroness and Pantera).

The real problem with the column, though, is the justification for each choice. There isn’t a single pick here that has a logical reason behind it, even including the aforementioned bands which deserve negative criticism on some level. Witness just a handful:

I guess this discussion leaves me with just one burning question: if you’re all a bunch of nihilists, what’s the point of publishing anything anyway? Oh wait, that’s a logical thought. Forget it. You wouldn’t understand.