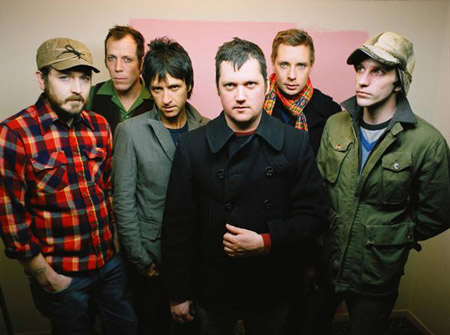 … except for the genre break through act Modest Mouse, that is. More than 15 years ago, Isaack Brock’s gang was playing music so original, so unidentifiable, so hard to mimic, that it was almost impossible to categorize into a genre, nowadays plainly called indie rock. Modest Mouse’s last studio effort, their fifth, titled “We Were Dead Before the Ship Even Sank,” was really amazing and uplifting, like much of the rest of their catalog, however I was left a bit begging for more.

Seeing how the band tends to release a new album every millennium or so, it wasn’t long ’till a sense of frustration slowly gripped me. Luckily for me and thousands of other Modest Mouse fans around the world, the wait for new material has been oh so shortened with the upcoming release of the band’s latest EP “No One’s First And You’re Next” on August 4th. The 8 track record is more of a collector’s edition, featuring unreleased tracks and B-sides from the band’s previous two studio albums, “Good News for People Who Love Bad News” and “We Were Dead Before the Ship Even Sank.” This doesn’t mean there aren’t any gems here, tho – far from it, friends.

Off No One’s First you can stream and download bellow two really awesome tracks – the country rock driven anthem “Satellite Skin” (Isaac is in top songwriting form here) and the incredibly eclectic “Whale Song,” a track which engulfs so many of the band’s previous styles, while still sounding remarkably original (the opening guitar riffs and haunting bass line are wonderful!).

Also you can stream “Perpetual Motion Machine” down at  SPIN, a jazzy, New Orleans infused track that’s also on the upcoming EP.

Modest Mouse will be on tour this summer with Grandaddy guitarist Jim Fairchild filling in for Johnny Marr, who apparently is hard at work playing with The Cribs.