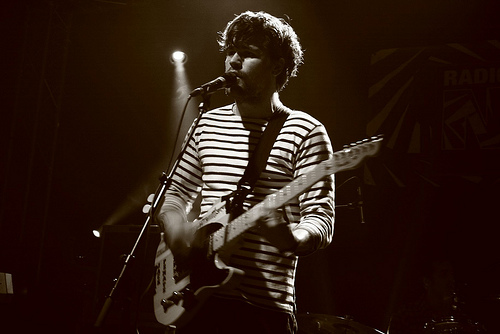 For those of you unfamiliar with Jack Penate imagine a male version of Kate Nash. If you’re unaware of who Kate Nash is consider yourself very lucky.

Catchy indie pop without much substance or depth was the state of play for Penate’s 2007 debut album “Matinee“.

This seems to all have changed however and in the two years since his popular, but rather slated debut was released, Penate has done some growing up and shared with us a more mature sound in the form of sophomore album ‘Everything Is New’.

A rather fitting title hopefully heralding a new era where Penate fulfills the potential which was always possible. ‘Everything Is New’ has received some great reviews from the likes of NME, Drowned In Sound and Planet Sound and it’s not surprising to see why.

Two singles, ‘Tonight’s Today’ and ‘Be The One’, have already been released and received good airplay and chart positions.

The next single release is ‘Pull My Heart Away’, the albums opening track which really sets the scene and as good as the previous two singles are is by far the stand out track from the LP.

In conclusion, if you’re someone who had encountered Jack Penate before and wasn’t impressed I urge you to give his new album a listen as you just might like it. ‘Everything Is New’ is out now.