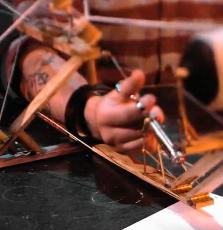 Coming off as one of the best video’s I’ve seen all year, this incredible piece of artwork visually animating Modest Mouse‘s infectious “Whale Song” will most likely make you pause for a second or two after watching it and before hitting the play button again. Dark, enigmatic, intricate, it’s all been laid down by director Nando Costa to form a catatonic world of strings, mazes and twilight. Word of advice, don’t watch the video until the end, if you feel uncomfortable with floating intestines.

Off the band’s recently released EP “No One’s First and You’re Next” out now.