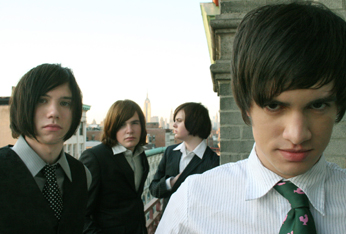 Saturday night ( July 7), the dudes from [tag]Panic! At The Disco[/tag] performed live as part of Summerfest 07 Wisconsin. During their gig, the band played a new track as well, set to be featured on their upcoming yet-to-be-titled 08 album, called “Love Is A Fairytale”. It sounds surprisingly promising, with some skillful piano play by frontman Brendon Urie and some very cool riffs by Ryan Ross. Anyway fun song, with not the best lyrics as we’ve gone used to P!@Disco, the chorus is quite repetitive. “True love, isn’t a fairytale/probably to make-believe/true love like ours/is worth so much more than a diamond ring”.

The video’s quality, from bellow, is crap but i guess you can make a picture in your mind on how the song actually sounds like.