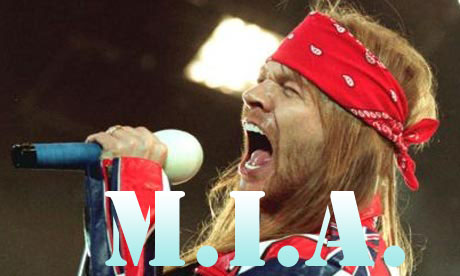 This came up as really strange, when I first read about it in The Sun. Apparently Axl Rose is nowhere to be found for the last two months, fact that apparently aggravates the hell out of Guns ‘n’ Roses‘ label, Geffen. It seems Geffen is really disappointed in Axl Rose, since the band just recently released its 15 years in the making album, “Chinese Democracy,” and the Guns haven’t done anything to promote it. No TV appearances, no concerts, nada.

“Everyone knows Axl is a bit of a maverick genius and won’t do anything he doesn’t want to do. The label is really glad to have him back. But it is frustrating because the album would have had a much better chance of going to No.1 if he had only been prepared to show his face. People have been trying to contact him for two months and he’s been completely AWOL. You would have thought after spending 15 years on an album you might do a few weeks promotion.”

I mentioned Axl’s mysterious disappearance on a few forums, asking about opinions regarding his whereabouts and I get some replies on the issue varying from “Axl’s lying face down in an amazonian jungle,” to “Axl’s locked in his basement playing WoW,” to “Axl is working on Chinese Democracy: the trilogy.” Really now, doesn’t anyone else, except his label, miss Axl? :D I’ve also heard a lot of people saying Axl is really running back and fourth trying to re-group the original members of the band. If that’s where he’s been for the last two months, then I don’t think Geffen is gonna have a tough time forgiving him, seeing how Rose + Slash on stage will bring in a lot of cash. Then again, it’s very unlikely Axl is in any of the above situations.

Chinese Democracy was beaten to the number one spot in the UK album charts by The Killers’ Day and Age (which sold 200,000 copies – nearly double of Chinese Democracy’s amount). First week US sales  Chinese Democracy are estimated at between 300,000 and 500,000 copies. It is expected to chart at number two behind Kanye West’s 808s and Heartbreak. The figures seem a bit disappointing, considering that people have been waiting 15 years for it and, after all, we’re talking about the Guns ‘n’ Roses. Truth be it, I’m listening to the album as I type and it’s quite good, I’m sure it’ll pick up.

In other news, Dr. Pepper decided to respond to the recent Chinese Democracy soda cans scandal, involving them. Here’s the most interesting part of their statement.

“We are disappointed that GN’R’s lawyers are turning a fun giveaway into a legal dispute.”

“We simply commented on the delayed release of Chinese Democracy and openly encouraged the band to release it before the end of the year. Axl even expressed support for our efforts earlier in the year.”

Is it me or this is getting overly too serious?