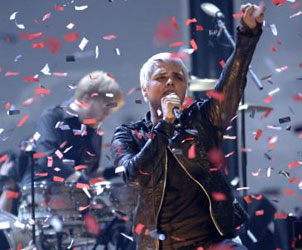 Oh, people never leave these poor people alone, do they? First there was that really awesome cruel emo witch-hunt back in Mexico, then there was that all press mambo jambo going on with an English teenage emo who killed herself, now to top things off the State Duma is thinking about passing a law to ban the emo current all together in Mother Russia.

According to NME a legislation is already currently being formulated in Russia to heavily regulate emo websites and ban emo and goth dress style in schools and government buildings. This comes as a solution from behalf of Russian officials, as an ‘attempt’ to solve the current “spiritual and ethical crisis” the country’s youth is currently facing. Apparently the emo current is highly regarded as a “dangerous teen trend” because it encourages depression and, worst of all, suicide.

In all fairness, I don’t like anything related to EMO. I don’t like the clothes, i don’t like the people (OK, some chicks are smoking hot, but they date losers, then again that’s another story) and, most of all, I don’t like the music, but that doesn’t mean me or anybody else is free to persecute and abuse of them. I mean, they’re human beings too and if they like to wear their hair on one side, hit make up and dress black, well that’s their problem, not mine, and certainly not yours. So, you people down at the Duma better get off your lard ass commy arses and start making laws that really help the Russian people. What you’re doing now is bullocks.

In Krasnoyarsk, Siberia, where laws are already being implemented, protestors in a march held signs saying “A Totalitarian State Encourages Stupidity”.

On the other side of the fence, Alexander Grishunin, an adviser to bill sponsor Yevgeny Yuryev, described a ban as necessary, stating: “This is the first step in the public discourse.”