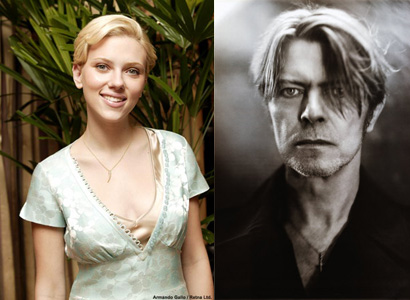 Yesterday night at New Yorke’s Joe’s Pub, the gorgeous Scarlett Johansson aka  the sexiest woman alive unveiled her debut album, titled “Anywhere I Lay My Head,” comprised of [tag]Tom Waits[/tag] covers. Ten Tom Waits covers to be exact and one original Scarlett Johansson track, called “Song for Jo,” to be fair. As previously reported the album was produced by David Sitek, of TV On The Radio, and includes some guest appearances from the Yeah Yeah Yeahs and Celebration, but the real shocker is that none other then [tag]David Bowie[/tag] will be featured on two songs, Falling Down” and “Fannin’ Street.” David, man, I envy you … again.

Even master Waits gave his blessings on the project: “I sent him some of the early, early recordings,” said Scarlett at yesterday’s conferance “and he said, ‘Go ahead.’

Scarlett, however, doesn’t have any touring plans, most probably here film work will get in the way, but she said she’d love “getting everybody together,” perhaps at a festival, at some point in the future. “It would be a missed opportunity not to.” Full tracklist bellow.

Anywhere I  Lay My Head: