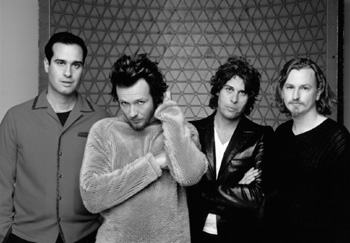 There was an entire soap opera revolving around the Stone Temple Pilots a few years back. They reformed, only to split up again a few months and a number of muddy statements later. Evidently, I become terribly surprise at the end of last year when I received a press release in which Scott Weiland announced the band was not only back together, but also planning a new record and huge tour to boost. I didn’t give it too much of a serious thought, until today when Weiland talked a bit the band’s progress.

“[We] just finished mastering our new album,” Weiland said Friday night while walking the blue carpet at the “Viva Elvis” Show in Las Vegas. “And we’ll be playing SXSW in March, with a few more dates. And then we go to Europe to play all the big festival in the early summer. [Then we’ll] come back with our own festival we’re putting together.”

There is no information on the name of the album, but we know is that it will contain the songs “Huckleberry Crumble” and “Between the Lines.” The album was co-produced by Robert DeLeo (the band’s bassist) and his brother/guitarist Dean and mixed by Chris Lord-Alge, while the recording process was split. “We definitely did this record differently,” Robert told Spin. “The fact that Scott, Eric and I have our own studios gives us the luxury of working at home.”

“We recorded at Eric’s studio, then would send songs to Scott and he’d record vocals at his studio,” he continued. “The band wasn’t in the same room as much as we could have been, but I think we’ve been making records long enough to know what to expect from each other. Plus, it added an extra bit of excitement to see what that person was going to record.”

I have to say, this doesn’t smell good from the very start – I mean, how can you possibly record anything consistent and soulful when the participants aren’t even in the same room, not to mention the same trip. Anyway, DeLeo promised, “Fans are going get a great STP record,” so I guess we’re just gonna have to take his word for it.