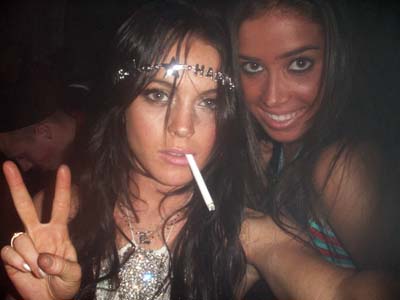 Lee Weaver, the former bodyguard of the controversial starlet [tag]Lindsay Lohan[/tag], has had enough with her wild nights and dangerous life style, so he quit his job and gave News of the World an exclusive story. I gotta tell you guys i was pretty shocked when i read this article, I knew Lindsay as the sweet girl from Mean Girls or Herby, but after this … i have to say she’s got some serious issues. Lee talks about, amongst many other things, how the rehabbing starlet attacked a gun-wielding cocaine dealer for ripping her off, snorted line after line of cocaine with Nicole Richie, slashed her wrists with knives, sobbing that she “didn’t belong on this planet”, and hot lesbian parties with random girls she would pick up at parties. Here’s a few of Lee’s testimonials:

“I have looked after some of the wildest stars in Hollywood — but never anyone as out of control as Lindsay is,” says Lee. “She had a total death wish and took more drugs and drank more than anyone I’ve met. I would pray every night she wouldn’t kill herself on my watch.”

Read the whole article here and also check out some of the pictures there, you can see Lindsay stoned/drunk.