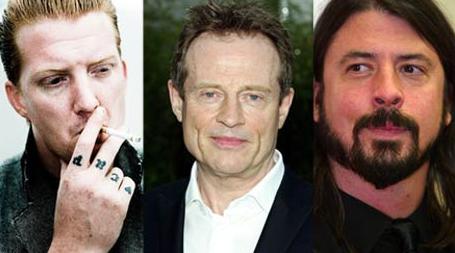 A while ago, I concluded that if 2008 was considered by many a year outshined by band reunions, then 2009 is definitely the year of the super groups. Last year we got to hear some awesome new material by newly formed bands, whose members were super, duper musicians, hence the term super group (doh). There was Monsters of Folk (Conor Oberst, Jim James, Mike Mogis, M. Ward), The Dead Weather (Alison Mosshart, Dean Fertita, Jack Lawrence, Jack White), Tinted Windows (Taylor Hanson, James Iha, Adam Schlesinger, Bun E. Carlos) and, of course, the absolute surprise of the year – Them Crooked Vultures (John Paul Jones!, Josh Homme! and Dave Grohl!). It was, and still is as a matter of fact, one of the most ambitious projects of the decade, one  that reunited the old guard of heavy rock with the contemporary rocking avantgard.

Now, I used still for a very good reason. In a recent interview with stuff.co.nz the veteran vulture of the squad, John Paul Jones, promised a new TCV album will be up and at it by the end of 2010.

“We’ll do a second album this year,” he told Stuff. “By the end of summer, something like that.”

He added, “We’re all hard workers. In a way we need to do this for ourselves. Once we committed to it we worked as hard as a young band would, put the hours in. It’s got to be good – we’ve got reputations to uphold more than anything else.”

When asked when can fans expect their idols to return to their original bands,  Jones said they’d get them “eventually”.

Jones said he was excited to be part of the Vultures and admitted the band’s success had helped make up for Led Zeppelin fans disappointed by the lack of a full-scale reunion.

“(Zeppelin fans) have been disappointed a long time – they’re getting used to it … I think they’re enjoying (the Vultures). It doesn’t sound like Led Zeppelin but it’s got a similar sort of vibe. It’s a groovy, exciting rock band”

Chemistry, hard work and “people who know what they are doing” were the key elements to a successful rock act, Jones said.

“We’re all hard workers. In a way we need to do this, for ourselves. Once we committed to it we worked as hard as a young band would, put the hours in.

“It’s got to be good – we’ve got reputations to uphold more than anything else.”