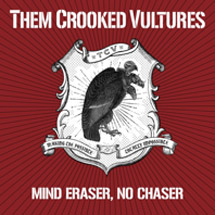 Them Crooked Vultures have released a new single from their forthcoming self-titled album called “Mind Eraser, No Chaser.” It’s named after the drink, and the song’s lyrics discuss the “dangerous side-effects.”

The song’s typical of what’s already been heard from the band: skittery, sideways riffs running rampant, Dave’s kit pounding and Josh’s swagger behind the mic. It’s playful, it’s fun, it’s awesome. But don’t waste any more time reading this. Go get it.   [Keep in mind you need an iTunes account.]