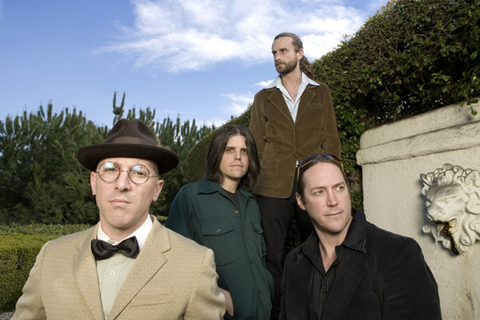 Tool‘s one of the few bands that have managed to build a somewhat unique sound, characterized by heavy riffed music coupled with melodic and mellow vocals, labeled by most as style-transgressing. The band’s sold over ten million records, within their four album lifespan, won four Grammys and last but not least gained a cult like fanbase. Reverting back to the Grammy’s, a curious fact is although frontman Maynard James Keenan resents the notorious awards for what they’ve become, he decided to join the ceremony for the first time this Sunday night.

“Well, it’s the 50th anniversary, and my son’s never been to the Grammys, and I’ve never been to one, so I figured it’s probably time,” Keenan told MTV News on the Grammy red carpet on Sunday. His date for the event was his 12-year-old son, Devo, who is a cellist for Ashes Divide, the band founded by Keenan’s A Perfect Circle co-founder, Billy Howerdel. “There are other things we could do, but this is very special, I think, and it will be the highlight of the year for him. I think he’s pretty stoked about it. We’re kind of easygoing.”

What does the Grammy Awards have to do with a new Tool record? Well it was at this last edition of the awards, that Maynard revealed that the band would soon be reconvening to start kicking around song ideas, although he didn’t give anymore details about the fifth Tool album.

“We’re going to start writing the new Tool record right away,” he said.

Maynard doesn’t know yet the band’s gonna break through the studio, when it’s gonna be released or even how it might sound for that matter, but seeing as Tool’s touring schedule is currently free, he reckons now it’s time for them to start working. For those curious the Tool frontman also elaborated a bit on how the band’s song creation process takes place:

“The music always comes first,” Keenan said. “We all get in a room, shut out all the extra noises from the other people and what goes on outside the room and just focus on the four of us, where we are that day. And then we just start making sounds.”