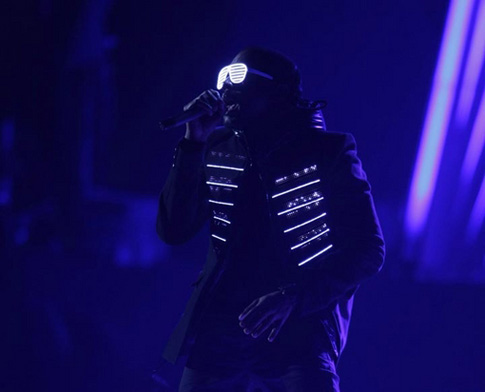 Kanye West performing, alongside Daft Punk, a new version of Stronger.
If you haven’t been living under a rock or something until now, then you’d more then certainly got bugged by all the Grammy hype, that thankfully ended last night. As expect nothing special, no surprise prizes, no stellar moments or mind blowing performances, but I’ve personally gotta admit it wasn’t as lame as I thought it would be. Think I may even have had some fun for a few good seconds, but I don’t wanna stretch it.

The 50th annual Grammy Awards, held now at the traditional Staples Center in Los Angele, was kicked off by Alicia Keys, as she “dueted” with a vintage performance by Frank Sinatra of “Learnin’ the Blues.” After that, the rest of the show was kinda boring with various mediocre performances, however with some occasional moments of good rockin,’ like the live shows from the Foo Fighters, who played a orchastral version of the Pretender alongside conductor John Paul Jones ([tag]Led Zeppelin[/tag]) and violinist Ann Marie Calhoun (the winner of the FF Grammy Moment contest), also worth mentioning was Tina Turner‘s performance, as well as the magnificent Love-in show by Cirque Du Soleil. A fun moment was also at hand when John Fogerty, Jerry Lee Lewis and Little Richard took the stage, each, at the Grammy Awards for a short session of classics. The 62-year-old Fogerty, was the first to start; it was also his first time ever to perform at the Grammys. The 72-year-old Lewis was next, blowing the dust off of his classic “Great Balls of Fire.” After that, another great piano player was in center, as the 75-year-old Little Richard simply blew awaythe crowd with “Good Golly, Miss Molly.” 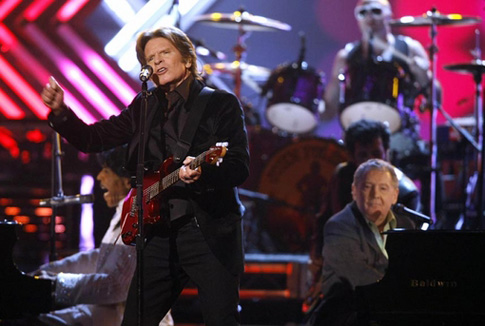 On the awards side, as expect Amy Winehouse brought home a handful, meaning no less then five wins, while Kanye West came at a close second with four wins; no more party crashing, hu smart guy?. Speaking of Kanye, the dude may have some severe self indulging issues, but he threw a hell of a show last night, when he was joined by Daft Punk live (the duos first ever televised performance) and played a special, alternate version of the hit single “Stronger.” Their performance was dedicated to Kanye’s late mother; peace man. The night’s shocker however, came when the Best Album Award was being announced. Everybody was expecting Amy or Kanye to take it home, but none other then  Herbie Hancock won with his “River: The Joni Letters,” a pleasant surprise I might add. All in all it was a decent edition of the Grammy Awards, most of the time it didn’t deliver, but some of the present artist’s great shows made up for it to a certain extended and almost made the time spent seem not like a total waste of time. Bellow you can find the full list of Grammy Award winner, per each category. For more details check out the live blogging posts from stereogum, RollingStone and Spiner.

Album of the Year
Herbie Hancock – River: The Joni Letters

Best Electronic/Dance Album
The Chemical Brothers – We Are The Night

Best Contemporary R&B Album
Ne-Yo – Because Of You

Best Song Written for a Motion Picture, Television or Other Visual Media
“Love You I Do” From Dreamgirls

Best Compilation Soundtrack Album For A Motion Picture, Television Or Other Visual Media
Love (The Beatles)

Best Comedy Album
Flight Of The Conchords – The Distant Future