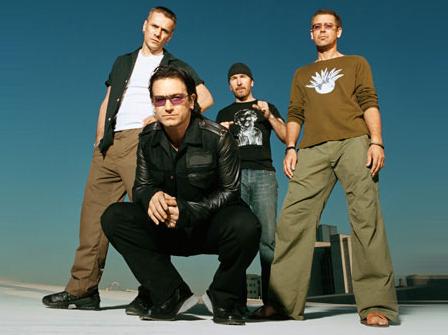 After a lifetime of playing soldout to crowds and in every corner of the world, U2 have done what their fans do all the time: line up to see a u2 show. That concert was “U2 3D,” a film of the band’s 2005-06 Vertigo tour, shot at several shows in South America with new 3-D technology.”I was really hoping we weren’t crap after all these years. Luckily we weren’t,” guitarist The Edge told The Associated Press before the band donned plastic glasses to watch the movie’s premiere at the Sundance Film Festival on Saturday night. The Edge was joined by singer Bono, drummer Larry Mullen and bassist Adam Clayton and he joked about the nonsense of watching themselves perform.

“It’s kind of horrific,” to see himself on stage in 3-D, said Bono. “It’s bad enough on a small screen. Now you get to see the lard arse 40-foot tall.” The Edge said the 3-D technology allowed “the songs to shine through,” though he was surprised to see the chemistry of the band in the details on screen, and how far apart his bandmates were on stage. “Are you saying you felt lonely up there?” said Bono, smiling. “No, I felt lonely for Larry,” The Edge replied.

“Irish people are essentially Latin people who don’t know how to dance,” he said. “When people are screaming and roaring and shouting, the humbling thing is to realize it’s not really for the band or artist on the stage. It’s for their connection with the songs. A song just can own you … . I think that’s why concerts are so powerful. If that song is such a part of your life, and you hear it, it’s too much almost.”. That’s the spirit lads.