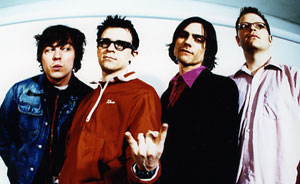 In a recent press release on their website, the band has announced that due to their new single’s, titled “Pork An Beans,”immense popularity, that it’ll push down the release date, for its upcoming album. Thus, Weezer‘s forthcoming full length studio album “The Red Album,” will get out on June 3, opposed to the initial June 24 date, in the USA with much of the rest of the world to follow behind with a few days delay.