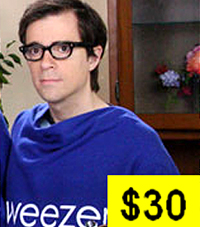 I like Weezer, I really do, even though everybody nowadays is up and about calling them sell outs and the likes. The band just found a winning formula, producing music that’s fun and easy to relate to. If you’re on the ‘Weezer sell out’ bandwagen too, keep this in mind: Weezer will never, ever produce another Pinkerton, and I think I’ve said this 1000 times already in one form or the other. They’ve had their intimate and personal records, so cut Weezer some slack. With this is mind, stop building yourself up with anticipation every time you hear the band is working on a new album. Who knows, you might actually enjoy it when it finally ships.

Weezer’s new album, “Ratitude“, came out last week, and even though it has some gruesomely terrible tracks, it still has Weezer written all over it and features “(If You’re Wondering If I Want You To) I Want You To” what’s maybe one of their best songs since “Hash Pipe” or “Island in the Sun.” Enough raving, what I wanted to show you today is as equally awesome, as it is lame. Presenting the Weezer Snuggy, an all purpose blankie with sleeves that allegedly is perfect for cutting heating bills, switching TV channels without loosing body heat and wearing around Weezer cult conventions. Please, somebody, anybody, tell me this thing isn’t for real!