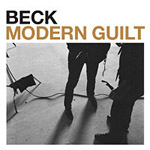 Oh, my! It’s just incredible how Beck Hansen has changed, evolving (or regressing when he’s going old school loco) in sound, as each record gets out. And here he is, at his 10th studio album, Modern Guilt, an album detailing an experience, an album that tackles a lot of Beck’s inner, unresolved issues with a more noir approach, radically different then the naive pop hooks he used to use at the beginning of his 15 year career. It’s understandable, the man’s pushing forty, the need to experiment naturally surfaces, but his fans will certainly be surprised by the psychedelic, vintage direction the LA hippie has chosen nonetheless.

The production work on Beck’s album’s has always been top notch with players like Dust Brothers or Nigel Godrich involved, but for Modern Guilt Hansen teamed up with a somewhat unusual pair, in the form of hip-hop top sound man Brian Burton aka Danger Mouse. The choice was an ideal one, if I may add. Danger Mouse did a fantastic job in complementing Beck’s ’60s psychedelia directions, much in the same way he masterfully accomplished with Gnarls Barkley’s LPs.

The record, as you may notice from the name, isn’t quite the most feel good album Beck has released, but the dark shroud thrown around its songs, has made Modern Guilt remarkably catchy and beautifully scary. The album’s first single, “Chemtrails”, is a perfect illustration of just this. Very eerie, very dark, but at the same time very fun and catchy. It has a great trippy beat, with a great bass line and, most of all, it features some awesome drumming from behalf of long time collaborator Joey Waronker. It’s also the only track not to feature any samples or loops from Danger Mouse.

“Orphans” is a great drum-n-bass rocker, while “Gamma Ray” is almost like a songs in a song, making a world of itself. It’s the clearest example of Hansen’s psychedelic ambitions and also has some eco friendly lyrics (“If I could hold hold out for now/ With these icecaps melting down”), alongside thoughts of nuclear annihilation. Speaking of lyrics “Profanity Prayers” includes lines worthy of Dylan, converted to 21st century mainstream society of course:  “And you wait at the light/ And watch for a sign that you’re breathing…”

“Youthless” is very fast and ominous. “Walls” is heavily sampled and features some backing vocals from Cat Power. Eventually Modern Guilt comes to a close with the stark ballad “Volcano,” but sadly it ends too prematurely. And speaking of prematurity, the record is waaay too short, barely spanning 35 minutes over 10 tracks, with most tracks being under the 3 minute mark. I appreciate quality, over quantity, but I get the feeling Mr. Hansen could’ve stretched the record a bit more, at least to a respectable 45 minutes.

Once herald as the post-modern savior of rock and the most intriguing counter-cultural person in the US, Beck Hansen has grown a bit surfeited, fact highly noticeable in his recent live shows. Nonetheless, the Scientology adept is still somewhat on top of his game, and this 10th installment, Modern Guilt, is certainly his most solid and satisfying album since Sea Change (2002).