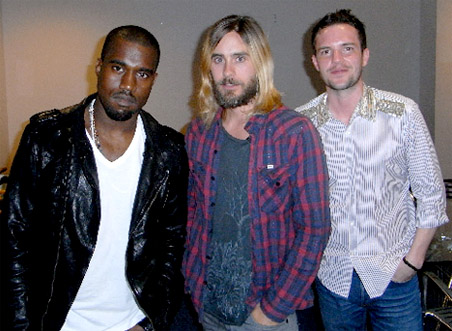 Kanye ‘Gay Fish‘ West, Jared ‘Jesus’ Leto and Brandon ‘Swarovski’ Flowers – the hippest bunch ’round this side of the Internet.

As if news of Creed and Limp Bizkit getting back together wasn’t enough for any sane man to bear, here’s another kick in the nuts – Kanye West and Jared Leto‘s emo outfit 30 Seconds to Mars are set to work together on a new song, that will most probably get featured on the band’s upcoming new album. Yes, dire news.

“I had actually brought up [the idea of working with West] some time ago, but it’s pretty unbelievable that it actually happened,” (you and me both, bud) Leto said. “He came by here, he was here in the studio, and we did some initial kind of listening, and he did some singing, and we knew we needed to kind of follow up and finish things, so I went over to Hawaii [with] an engineer and a small crew, and we had a great time.”

According to MTV, the song the two are working on is called “Hurricane” and features Kanye’s softer, more delicate side, since apparently he ‘sings’ more than he raps. That if you call auto-tunes and software singing…

“This is Kanye singing. I happen to think he has a really great voice. I like his voice a lot,” Leto said. “My favorite is when he sings, as opposed to rapping, and I told him that as well, that I really liked him as a singer. But the Auto-Tune thing doesn’t really bug me.”

30 Second to Mars’ new album, “This is War,” will be out sometime this year, around September. [via P4K]