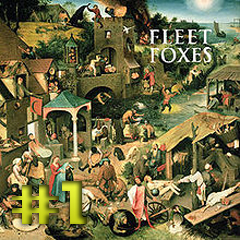 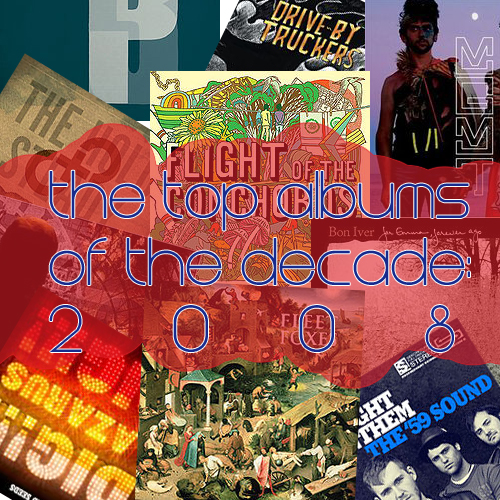 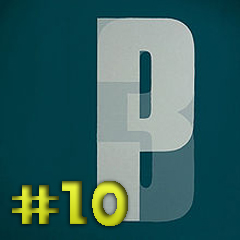 Muscular synthesizers, drum breaks and abrupt endings keeping the tension high. In a few words this is how Portishead’s third studio release, suggestively titled “Third,” sounds like. An amalgam of noise, distortions and Eastern Bloc minimalism is what the first listener might perceive, but in truth it’s much for that that. It’s dark, it’s raw and it’s fascinating, to say the least.

It’s enough to stay past the sheer brilliance of “We Carry On” (one of the many stellar tracks off Third) to understand what I’m talking about.

It’s the most haunting albums of Portishead. Brilliantly complicated and emotional. Never before has instrumental electronic music  sounded so fresh like “Third” does. (Tibi Puiu) 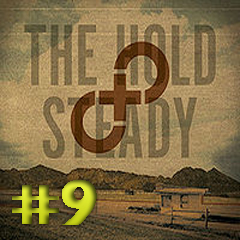 “Stay Positive” was, more than any other Hold Steady album thus far, a major shout-out to the hardcore bands and punk influences that hang out in the back of their sun-drenched sound. On the first (and arguably best) track “Constructive Summer,” Craig Finn calls for a toast to Saint Joe Strummer in one of 2009’s most crowd-pleasing lyrics. On the title track, Finn cites 7 Seconds and Youth of Today, which sound out of place the first time you hear it, but when you think about it, The Hold Steady’s 4th and possibly most anthemic (easily the most crowd-participation garnering) record feel right at home with that aesthetic. Sadly, this would be the band’s final album with game-changing keyboardist Franz Nikolay, who left the band before their follow-up “Heaven is Wherever.”  (Ty Williamson) 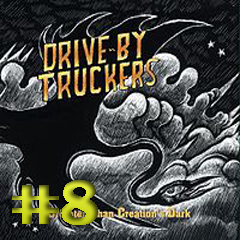 AMAZING TRIVIA: this album was almost named Urban Bovine Knievel, which is probably the most regrettably discarded album title in the history of recorded music (perhaps second only to Taylor Swift’s upcoming Speak Now record, originally entitled Don’t You Dare Speak Now, Kanye, You Egomaniacal Sack of Crap until those damned interfering focus groups got their hands on it.) So. This will probably be best remembered for being the Truckers’ sprawling answer to Jason Isbell’s departure from the group, but it’s much more than that. It’s an encapsulation of everything the Truckers are capable of – everything. Old-time Country Gold, greasy rock n’ roll, remarkably genuine protest rock, and a strange and distracting anti-drugs screed all get wrapped together in a big, but strangely cohesive package. Possibly its most specific accolade is that it contains the greatest second verse of the decade, in “Two Dimes Down”. (Al Byrne) 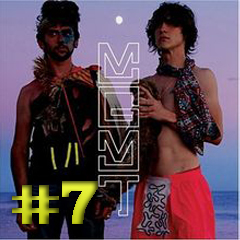 This brooklyn wheat-from-the-chaff synth-psych-whatever duo’s major label debut reminded me what I love so much about the band Ween, of all things. Back in the late 80’s, billions of kids got high and messed around with 4-track recorders and made music, but Ween were among the few who did it incredibly well. Fast forward twenty years: Our generation now gets high, drunk on PBR, or whatever, then tinkers around with incredibly advanced equipment to make music, often without the help of a major label. In this case, though, two of the guys who did it well got the promotional and financial support and ran the hell up the hill with it. I can’t think of a catchier opening than the bing-bong lead to “Time to Pretend” that opens the album, or the early-Depeche Mode meets Williamsburg lead on “Kids.” It doesn’t hurt that Andrew VanWyngarden’s lyrics are deceptively clever and a perfect fit for those kids.  (Ty Williamson) 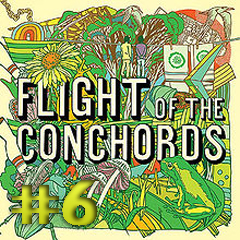 I would assume this is the only musical comedy duo from New Zealand to make it into our grand list of top albums from the last decade. Flight of Conchords self-titled 2008 debut does require previous exposure to their HBO TV series before the jokes take full effect, but equal praise must be given to Jemaine Clemant and Bret McKenzie’s unrivalled talents for compositional dexterity. This album is a hilarious pastiche of genres, from vintage French pop through to gangsta rap and ‘socially conscious’ Marvin Gaye-flavoured soul. Each fan will have their favourite, although “Hiphopopotamus vs. Rhymnoceros”, “Business Time” and “Ladies of the World” (ending on a surprisingly beautiful and moving crescendo sequence) are among the most admired. If you have yet to experience the show or the songs, I can only envy you. (Conor O’Brien) 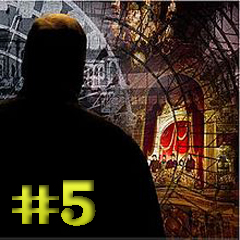 If Z was My Morning Jacket taking a surprising and brilliant left turn, Evil Urges is the band spinning counter-clockwise in place, and dizziedly falling on top of an omnichord. Which means the highlights (“Highly Suspicious”, “Touch Me Pt 2”) are as confusing as the lowpoints (“Thank You Too”, “Look At You”). Yim Yames – no, wait, that’s still ridiculous – Jim James transforms his reverb-laden drawl into a sharp Prince impression, the band shapeshifts between genres, like a peculiarly talented chameleon, with an enviably effortless touch, and they still manage to whip up a “One Big Holiday”-style storm on “Aluminum (Aliminium! – Pedantic Ed) Park” and “Remnants”. If the songwriting had been a smidgeon more consistent, this’d be a classic, rather than a curiously admirable addition to a very strong catalogue. (Al Byrne) 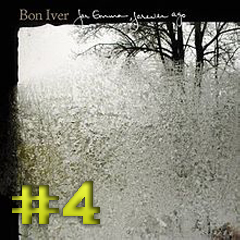 Meet Justin Vernon, better known by his moniker of Bon Iver – possibly the most brilliant new name of 2008. His success is quite easy to replicate, actually, if you’re looking to put out the best debut of the year. It’s simple: boy gets heartbroken, boy ‘shelters’ himself from all the pain by isolating himself in his parent’s deep mountain hunting lodge, boy writes heart moving songs, boy releases “For Emma, Forever Ago.” Be advised, not everyone is Justin Vernon, tho.

Not only is Bon Iver’s For Emma, Forever Ago a fitting album for people who love terrific, tranquil music but it is essential for anyone who is even remotely serious about music. What Vernon accomplished is simple to feel, yet complex and arduous to illustrate. Hit play!(Tibi Puiu) 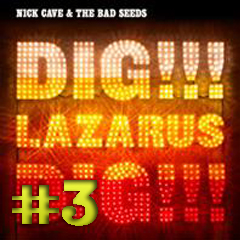 It is artists like Nick Cave that can restore faith in the current standard of society’s creative output. Granted, he may be plying his trade for over thirty years now, but this inimitable poet and songwriter is easily one of the most consistent artists of our time – playing with long-term band mates, composing soundtracks, writing novels and setting up successful side projects in Grinderman. Released when Cave was in his 50th year, “Dig Lazurus Dig!!!” has more energy, enthusiasm and attitude than most bands on the outer edge of adolescence can conjure, but both lyrically and sonically it shows years of experience and expertise. As much as Cave is an unrivalled wordsmith, his backing band is one of the most identifiable yet adaptable bunch of musicians around – get the Bad Seeds to cover Metallica or Charlie Parker and you will still get the Bad Seeds. (Conor O’Brien) 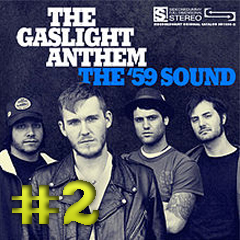 Let’s just get it outta the way: Yes, they channel Springsteen. Yes, they’re also from Jersey. Yes, Brian Fallon even sounds (a lot) like Bruce. But the key to appreciating this record – and the band – is to understand that the one aspect of The Boss they borrowed heaviest from is the purely honest songwriting. “I’ve never felt so strange/ Standing in the Jersey rain/ Thinking about what an old man said/ Maybe I should call me an ambulance” would only work from a band that believed in it the same way you believe in gravity. True earnestness is hard to fake – and when it’s clear that it is, the results are disastrous. See either of the last two Wallflowers records for proof. Here, though, TGA have legit earnestness coming outta the yin-yang. Fallon’s head might be down when he sings a sad lyric, but you’re lifted up as a result. (Steve Lampiris)

If Nick Drake ever wanted to be an indie darling of the 21st Century, he’d be fronting the Fleet Foxes. Clearly the band’s biggest influence overall, he lives on in this superb collection of acoustic ditties. That’s not to say that FF are ripping him off – certainly not. They are borrowing from his somber plucking, sure (especially “Tiger Mountain Peasant Song”), but Robin Pecknold vocally more resembles Jim James than Drake. Add to this the fact that FF use Drake as a jumping off point, throwing in videogame-esque wonderment (see “White Winter Hymnal”) as a device to get emotion across – and effectively at that – and you have one hell of a beautiful record. Folk on. (Steve Lampiris)