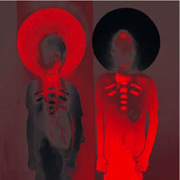 It’s been four years since we haven’t heard anything new from [tag]UNKLE[/tag], but now their back in full throttle, with their new LP: “War Stories”, set for release in early july.

War Stories is due out on July 9 and was co-produced by James Lavelle and Chris Goss from Queens Of The Stone Age, under James Lavelle’s new label, Surrender All.

“War Stories marries UNKLE’s trademark sound and integrates it with traditional rock influences to stunning effect. Recorded in the desert outside LA at Rancho de la Luna (where the Desert Sessions have been recorded) studio and in London at James’ new Surrender Sounds studio, the album comprises of fourteen tracks of epic proportions.”

This new album has a impressive guest vocalist list, including the likes of: Josh Homme from [tag]Queens of the Stone Age[/tag], Ian Asbury from The Cult, 3D from Massive Attack, The Duck Spirit, Autolux and Gavin Clark from Clay Hill. Also James Lavelle teams up with Richard File for a second time on the “Morning Rage” track and delights us with his debut as a vocalist on “Hold my Hand”.

The standard CD will come with a 32 page booklet, but there is a limited edition 2xCD, with extended 50 page booklet and an outer slip-box opening up to reveal the standard CD and a second CD featuring the instrumental versions of the songs appearing on ‘War Stories’.