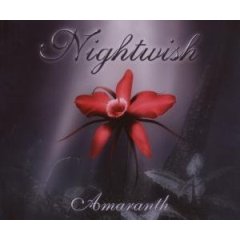 This is a few months late but the point here is not to talk about the single itself but how the talented Anette Olzon is able to replace the almost legendary Tarja Turunen; she was asked more or less politely to leave the band in October 2005. Having listened to every track they recorded and admiring their work it is hard to not talk about that.

So after about a long search lasting not far off a year and a half, with around 2000 demos from all over the world they selected Swedish Anette Olzon. She has a style which is in many ways different than her predecessor. There is no doubt that the classically trained Tarja can reach notes in a way that Anette can not but that is not the problem. The thing is that for the first time Nightwish is sounding happy and catchy. Amaranth is a very good piece of work but it is just not fully their style. They are back but they are not bigger, better and more beautiful than they have ever been.

“While Your Lips Are Still Red” is a nice punch and it reminds somewhat of “Once”. It unleashes a softer side to Marco’s voice we have not yet heard; it is probably the best track you are going to find here. “Eva (Orchestral Version)” is strange but it probably is better that they added a ballad to change the mood a bit. Reach is basically Amaranth with no orchestra and Marco singing vocals but his strong falsetto sounds a bit weird. And there is Amaranth.

Amaranth is probably very limited and in no way representative to what Dark Passion Play is going to be. It is catchy and has a strange way of making you listen to it but it still is nearly pop music in the chorus at least. So Nightwish released a single in which the lead song is very similar to pop music. It is fun music but not the deep profound and strong music we are used to from the band. Hope the album sounds different from this. So with Anette they sound different and they lack that depth which fascinated the world of Symphonic rock and not only as they reached the hearts of people who had no connection to Symphonic rock. Tarja is missed.