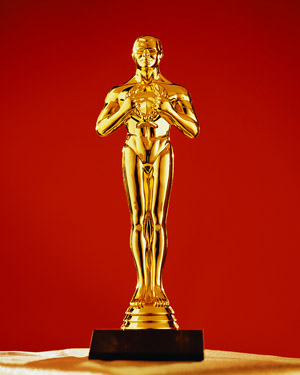 This year’s 80th Oscar nominees are  in, with it’s fare share of pleasant and well, not so pleasant surprises. As not so pleasant goes, we were a bit dishearten when the nominees list was posted, earlier this morning, and we couldn’t score Johnny Greenwood or Eddie Vedder on the list, despite countless critical appraisal. We remind that Johnny scored the soundtrack for one of this years, best picture nominee There Will Be Blood, while Eddie won a Golden Globe this year with his “Guaranteed” from Into The Wild, but the Academy Awards people know best.

The best song category of the Academy Awards is dominated by, the fairy tale film Enchanted‘s, soundtrack  with a whooping three out of five nominations, all with music by Alan Menken and lyrics by Stephen Schwartz, in the form of “Happy Working Song,” “So Close” and “That’s How You Know.”

In the best original score category, the nominees are Dario Marianelli for “Atonement,” Alberto Iglesias for “The Kite Runner, James Newton Howard for “Michael Clayton,” Michael Giacchino for “Ratatouille” and Marco Beltrami for “3:10 to Yuma.” A notable
mention goes to Cate Blanchett, who was recognized with a best supporting actress nod for her portrayal of Bob Dylan in “I’m Not There.”