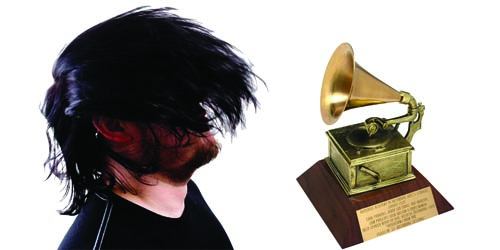 Yes, this column is months and months late. Get over it. I wasn’t writing for ZME in February and, more importantly, I have a valid point to make. So here we go.

The National Academy of Recording Arts and Sciences doesn’t know shit about music. The Grammy Awards used to mean something and were actually worth paying attention to. I don’t know when the award’s value began its downward trend. Perhaps it was when Album of the Year was given to Celine Dion. Whenever it was probably doesn’t matter as much as the simple fact that today the Grammy Award isn’t worth the bronze and wood that it’s made out of.

But instead of just ventilating on the topic generally, I am going to use metal as a microcosm in order to illustrate my point more effectively. This year’s Grammy Awards marked the Twentieth Anniversary of the Best Metal Performance category, and after all this time I shouldn’t be surprised that year after year the NARAS has no idea how to accurately judge what constitutes the best of metal and, perhaps more importantly (or more depressingly), what metal even is. From the outset it was clear that this group had no idea. The metal category has its genesis in another award category: Best Hard Rock Performance. The NARAS doesn’t quite get that either, but I shall leave that issue to one side. The original title for the category was the ridiculously amalgamated title “Best Hard Rock/Metal Performance” and debuted at the 1989 ceremonies. Oh, and let’s not forget that for the award’s first year, the nominations were for albums and not songs. I’d explain just how dumb  giving one specific category’s (and a brand-new category!) nomination via album is but I don’t possess a vocabulary that goes on ad infinitum.

Since Metallica was nominated for …And Justice for All for the award’s debut year, it was basically assumed that they would win over any other artist’s work from 1988. Except, they were beaten out by Jethro Tull. As Entertainment Weekly aptly put it, “A record with flute solos bested Metallica’s thrash-speed touchstone …And Justice for All.” Every year since, the award has been split into two categories, Best Hard Rock and Best Metal performances. In the ensuing two decades, the NARAS has proven time and again how little – if any – knowledge they possess about metal music. Even though hard rock and metal have been two different awards for 19 years, the two still cause confusion as to what each is within the NARAS. To wit, Soundgarden won an award in both categories the same year for songs from the same album! “Black Hole Sun” won for Hard Rock and “Spoonman” for Metal. Want more? The Deftones’ “Elite” won the metal Grammy even though both Pantera and Iron Maiden were nominated that same year. By the way, the Deftones aren’t a metal band – unless, of course, one considered nu-metal as part of the metal family. But even if they were a metal band, Maiden put out “The Wicker Man” that year. Come the fuck on.

It’s sad, really. For an organization that, according to the official Grammy website, prides itself on “its rich legacy and ongoing growth as the premier outlet for honoring achievements in the recording arts and supporting the music community,” the Grammy Awards are becoming more and more worthless to more and more artists each year – especially in the heavy music community. Even those that have won awards in the metal category wonder about the Grammy’s relevance. Maynard James Keenan, whose band Tool has won Best Metal Performance twice, has been quite vocal about the subject: “The Grammys are nothing more than some gigantic promotional machine for the music industry. They cater to a low intellect and they feed the masses. They don’t honor the arts or the artist for what he created. It’s the music business celebrating itself.” Trent Reznor has expressed similar sentiments on his Nine Inch Nails blog: “While the music industry is doing everything they possibly can to go out of business, can we all make sure to rid ourselves of the Grammys, too? Out of touch old men jacking each other off. ENOUGH!” NIN also have two Best Metal Performance Grammys, in 1993 and 1996. (It’s debatable whether or not NIN is actually metal qua metal but it’s damn closer than the Deftones.)

There are three ways to solve this problem: 1.) the Grammys remove the Metal category and return to 1988’s format, 2.) the Grammys expand the pool of nominees to include extreme metal bands, or 3.) they break up the category into Best Mainstream Metal and Best Extreme Metal Performances. Clearly, the NARAS is already half-way to option three considering that the best in metal by its standard is really the best in mainstream metal. Honestly, the metal community would probably prefer option one over any other solution. Really, at best the relationship between the Grammys and metal has been very close enemies. Certainly, the NARAS took the first step by recognizing metal as a legitimate music form but metal as a entity never really gave a shit about such nonsense. From a metalhead-yet-objective-critic standpoint, I have to admit that while it is great to see the Grammys – however infinitesimal in importance they are these days – recognize metal as an art form. That said, I also have to admit that I’d like to see the NARAS stay the hell outta something that it doesn’t comprehend on any level beyond the superficial. (I’d also love to see the Grammys have an Album category for metal in addition to Performance, but let’s not get ahead of ourselves here.)

Therefore, considering that the Grammys really only cater to popular music, with minimal indie involvement, it would probably be best if the Grammys just dropped the metal award altogether. Since the NARAS doesn’t get it, there’s no point in giving out an award. Besides, the majority of those that believe in the Grammys don’t listen to metal anyway. If they did, you might have seen a metal song or album get a real win within the “Big Four” besides Metallica at some point. Frankly, apart from this year’s win, I’m not even sure that their wins count. “Better than You“? Seriously? But, since the NARAS doesn’t have the knowledge to properly nominate music for the metal category, I thought that I would help them out just this once. So, here are my (read: quality) picks for the best metal performance of the 2008 calendar year.

“We Are the Nightmare,” Arsis: The title track from Arsis’s third, and strongest, record, “Nightmare” find the band more technical than ever. Frontman James Malone’s rasp is as putrid as anything in black metal and his guitar abilities have reached a mind-blowing level. The combination of spiraling riffs and unstable-yet-controlled drumming is simply beautiful. Arsis’s fusion of Scandinavian melodeath and thrash couldn’t have arrived at a better time.

“Bleed,” Meshuggah: “Bleed” proves that this Swedish quintet still has it. Jens Kidman has never sounded this abrasive – in a good way. His vocal track here could fucking split concrete by itself. Over a thick-as-a-brick chainsaw riff, Tomas Haake displays his world-class skills behind the drum kit. There’s a reason that Haake was named the number one drummer in Modern Drummer magazine last year. A return to form, for sure.

“The Aftermath,” Origin: Holy shit. Easily the most insane death metal song of this decade, “The Aftermath” knocks you on your ass and then stomps on your throat for good measure. John Longstreth sounds more like a jackhammer than an actual human drummer, while guitarists Paul Ryan and Jeremy Turner make Eddie Van Halen sound like Ryan Peake. This song is like being beaten by a coke addict with a baseball bat. I want more.

“The Lotus Eater,” Opeth: As Sweden’s most consistent musical export, Opeth have never failed to deliver a fantastic journey of the mind. “Eater” is no different. After an opening that features Mikael Åkerfeldt humming (I know!), the song immediately dives into one of the most aggressive Opeth tracks in its history before going off into some Pink Floyd-esque outerspace noodling and then back again. While it does feature Åkerfeldt’s growl, “Eater” also has one of the most beautiful melodies that Opeth has ever recorded. Simply stunning. I wonder if it’s actually possible for Opeth to put out a bad record.

“I Am a Cybernetic Organism, Living Tissue Over (Metal) Endoskeleton,” Austrian Death Machine: Yes, that is the full title. And, yes, it’s a quote from “Terminator.” ADM is the side project of Tim Lambesis, the vocalist for As I Lay Dying. Yes, AILD is generally classified as metalcore and perhaps ADM should be considered as such, too . But it’s just so damn entertaining. As Lambesis states on the official site, ADM is “based upon Arnold Schwarzenegger and his movies.” Lambesis, who did all the vocals (aside from the “Ahhhnold” impressions) and played all the instruments, is in top form here. It just sounds like he tried harder here than on the last AILD record. Plus, it’s always great when you metal gets you to laugh.

So there’s my wishlist for what this year’s Best Metal Performance shoulda been. And, yes, it is a wishlist. I am aware that these picks are more or less pie-in-the-sky idealism that borders on child-like optimism.  I’ve made peace with that. It’s probably also a fantasy to even hope that the NARAS actually comes close to an understanding both of what metal truly is and what constitutes metal deserving of an award. Hell, I’ll take one or the other at this point. But, hey, a man can dream, can’t he?