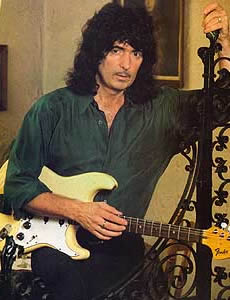 In case you’ve been living on some other distant planet, you know that in every shop you go there’s at least one record in the ‘must have’ section that involved Ritchie Blackmore. Whether it’s from Deep Purple, Rainbow, Blackmore’s night or any other project he’s been involved in, you know it’s a work of art. Still, you have to admit, the man’s taste for music has changed considerably along the years.

Starting with hard rock legend Deep Purple… it was gold !! The intro to Smoke on the water, you know?? It’s mind blowing, just amazing. But then, something started to change; at first only band members noticed, but then it started to become obvious. Renaissance folk started to play a more and more important part in his life, and in ’97, his passion materialized into what is known today as Blackmore’s night. Along with his longtime love, he fulfilled his dream. Wait, what ??

Well, personally, I love folk music, and am very passionate about the Renaissance. But it has to be said, not many share my passion. Ritchie surprised and many fans were dissapointed that the rock icon had in fact other interests. Ultimate-guitar (perhaps most amazing guitar site) published an interview with the man. While we won’t give you the full thing, you can find it on their site; nothing is taken out of context. Massive, massive inspiration here.

UG: How far back does your interest in Renaissance-influenced music go?

Ritchie Blackmore: 1972, when I first heard David Munrow and the Early Music Consort of London. Obviously, being English, I was exposed to Renaissance music as I was growing up – albeit subliminal, probably from the radio.

Was there ever a time in Rainbow or Deep Purple when you would approach your bandmates with ideas that are similar to something we hear in Blackmore’s Night?

Yes, I used to drive them nuts playing the theme to what is now “Renaissance Faire” back in 1976.

Congratulations on Secret Voyage earning the #1 spot on the Billboard New Age charts. Did you approach this album in a different way than past Blackmore’s Night albums?

No. We always approach it the same. We have our producer arrive from LA, we go out, get drunk, come back, go downstairs in the dungeon to our home studio, lay down some tracks. I always start by laying down the guitar first, with Candice doing a guide vocal. Then Pat learns his part that we gave him. We progress from there.

Would you consider yourself a perfectionist in the studio?

Absolutely not. I usually end up by not being too impressed by what I’ve played – but I hate to spend more than 15 minutes in the studio. The studio always gives me the creeps. It reminds me too much of being in a classroom at school. Much too sterile for me. I’d rather be playing in a wood surrounded by trees, but they haven’t invented a recording tree yet that I know of. Having said that, I’m sure someone will say that they have. I’ve never really played my best in the studio. Sometimes by sheer luck I’ll play something that works.

Do you ever see yourself making another rock album?

I don’t know. I like playing heavy rock blues. I still play it to myself. Haven’t gotten around to being in a studio playing hard stuff yet. Maybe next time.

What are some techniques that you found invaluable during your early years as a guitarist?

I have just one technique: It’s my own. I’m not very good at copying other people, never have been.