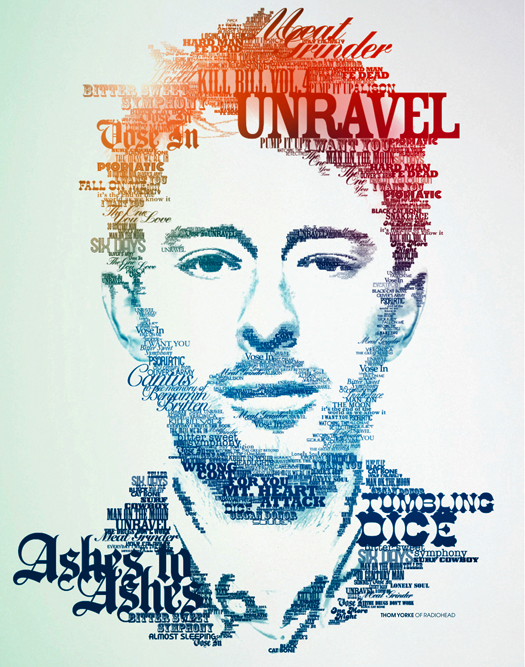 A few weeks ago we reported a bit about this year’s Grammy Awards nominees, noting, among others, that the Grammys are finally stepping the game and picking up. The last two editions were disastrous, from multiple perspectives, especially ratings-wise.

The nominees are a bit more relevant (don’t expect for miracles, though), the organization seems  better and even the promotion process is a lot more interesting, the latest project being  a cool awareness campaign, featuring various Grammy award winners or nominees, such as Stevie Wonder, Radiohead‘s Thom Yorke, Coldplay, Lenny Kravitz, Lil Wayne, Rihanna and a few more.

What’s interesting about the campaigns is that every artists gets hist portret designed such that their faces are made out of song names, 15 to be moer exact, of their choosing (the ones they thought were most inspiring for each of them).

With the Grammys coming up on Februry 8th, it’ll be interesting to see what they come up with next out of their ideas sack, as the event gets closer and closer. Until then, anyway, check out more portrait art on Spinner and Pitchfork. A cool video, featuring Stevie Wonder’s Grammy portrait inception can be viewed bellow.

Oh, and as a small remark, we’ve come of news that three of the artists performing at the Grammys have been announced. They are Coldplay, Lil Wane and The Jonas Brothers, while the rest of the lineup will be made public, most probably, on Wednesday.