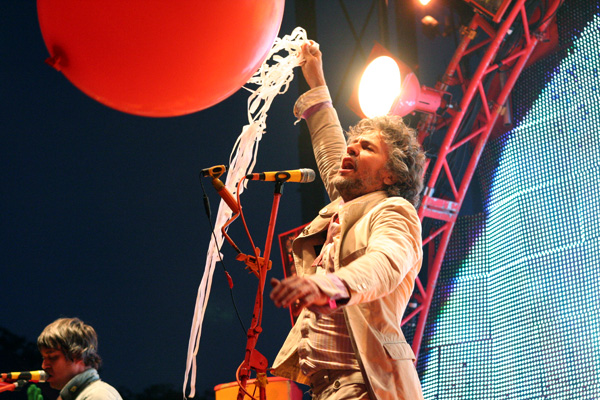 As previously reported, The Flaming Lips‘ follow-up to their recently released full length “Embryonic” will be a cover album of Pink Floyd’s classic Dark Side of the Moon, most probably adapted to the band’s eclectic experimentalism. This Friday, The Flaming Lips hit the KCRW studios where they played Pink Floyd‘s 1973 classic closer “Eclipse“, as part of their session for the station’s Morning Becomes Eclectic show. You can check out the faithful rendition of Eclipse here or click the play button on the embedded video bellow to see the Lips’ whole set, which includes new tracks “Watching the Planets”, “Convinced of the Hex”, “I Can Be a Frog”, oldie “Enthusiasm for Life Defeats Existential Fear”, and lot of insights regarding their upcoming PF project.