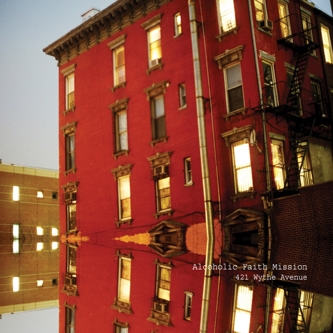 Alcoholic Faith Mission are an indie pop/electronica alternative band from Copenhagen, Denmark. The band includes five members: Sune Sølund, Thorben Seierø Jensen, Kristine Permild, Laurids Smedegaard and Gustav Rasmussen. They’re only three years old as a band, yet have already released two albums, their music was used in a Canadian indie film – “Point Traverse” – and they have already had many live performances around Europe. Their very first album was called “Misery Loves Company” and was recorded in Copenhagen, in Thorben’s own bedroom. It was released October 30th, 2006 and you can listen to some tracks here.

You’ll see a resemblance to Iron & Wine (and Moonbabies, in my opinion, as well), but when switching to their second album – “421 Wythe Avenue”- you’ll observe a pretty radical switch. Their second work implies much more use of electronical distorted sounds. Thorben describes the work for the second album as: “Creating samples, beats and synthesizer sounds only by dictionaries – electronically muted bass drum – reverse guitars and screams”. Their second album was fully recorded in Brooklyn, New York, but you’ll find out more about this fact and about the writing and recording of this second work from the interview, following the review of their second album.

“421” is a journey that contains 11 tracks, a journey that begins with a most simple, soothing and breezy song – “Theme from soft ice cream products” – the keyboards, some quiet bells and the tasty combined vocals of Kristine and the guys will keep you company while embarking on their faith mission. “Gently” will blow you away right from the very first verse (which of course will remain a surprise to you, until you listen to this track)… following the same pattern when thinking about the use of instruments: keyboards, percussion, drums, guitars and samples. The first two songs are quite chill-out and slow, yet have a very intense sound at heart. They would perfectly be chosen for lounge music, yet the lyrics will make you listen to them once again at home, for sure.

Here comes the best part of the second album: “Nut in Your Eye”! Kristine will be here most dazzling. It’s where she most fits with the song, with each and every instrument and with Thorben’s/Laurids’/Gustav’s voices. The keyboards and drums are so much more evident here and there is this constant rise of intensity in each of the other instruments. It’s simply great! I would also like to mention here one of the songs form the end of the album called “Did You Eat”, because these two are more closer to my heart. They fall under the same more up-beat category. They still possess the intensity that perfectly characterizes the entire album, but seem more fresh and energic. The use of the guitars is much more clearer, especially on “Did You Eat“, and combined with their vocals, all of this makes it one hell of a song. Congrats to the band for these two songs!

“Painting Animals in Watercolors” starts great, in the same energic and positive manner. A strong bass, powerful drums and very playful keyboards, which is followed by Kristine’s beautiful vocals. However, the rest of the album is quite of a blur for me. I’m not saying it’s not worth listening or that it’s not as good as the other songs I’ve so far mentioned. It’s just that they contain lyrics that are way too sad to be put next to the first songs I’ve described, instruments that are chilled to the max, with a lot of sounds that seem in rewind, perfect for an utterly dramatic movie. Two different EPs could have easily been released here. Even though I’m more in tone with the 5 songs I’ve currently queued in my playlist, maybe some of you will like this paradox. You might very well find the perfect narrative string of this journey, going from slow to fast, from sad to almost-happy and enthusiastic… All in all, you must listen to these eleven tracks in order to choose the song that best fits with your character. Moreover, the talent of the guys is more than obvious in all of the songs. The album will be rated by ZMEMusic.com with 8,5 out of 10 poins! It’s not perfect, but it’s a very complex work, that contains beautiful, pradoxically juxtaposed opposites that might be a beauty for all of you postmoderns out there! Congratulations to AFM and keep up the very good work!

Tracklist of the album: