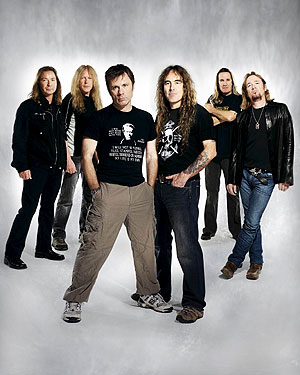 Iron Maiden have made a powerful, epic comeback and they’re riding hard and fast, keeping the headlines quite often. After buying a jet, planning a tour and releasing ‘Live after Death‘, now they’re after new, younger fans who have yet to listen to the metal titans.

How will they do this? Wait! Lemme guess… they’ll put a record up for free download? That’s what seems to be the greatest thing these days, so that’s what they did; and what better album to do this with than a best of release? They know their music and marketing, that’s for sure! Iron Maiden have prevailed over the world of heavy metal for almost thirty years, yet are also without doubt one of the most contemporary and exciting bands of the 21st century.

So reading a press release that appeared on the official site, I found out that EMI will launch the unique SOMEWHERE BEST IN SOUND in an unprecedented way, whereby people can download the entire album free of charge as a high quality audio file (WMA) which is a typically powerful 320 kbps. You will be able to listen to it three times before it expires.

“We wanted to give the kids of today a fair chance of hearing the music as we would have first heard and experienced it in our day when checking it out in a record shop — top quality sound, in their own time and in an environment of their own choosing so they are able to absorb the depth and worth of the music and lyrics that make Iron Maiden the phenomenon they are. What better way to use modern means and a very high quality download! Sadly the WMA (Windows Media Audio) isn’t compatible with Macs or iPods but we are confident that our young fans are adept and fluent with modern technology and we will post simple instructions on our website for any that need guidance.”