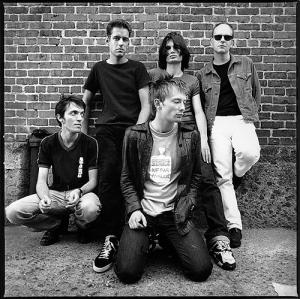 It’s a Radiohead frenzy mates! They do absolutely nothing for years and years and then they just go and go and go and you just have to talk them. After just yesterday we told you that they’re gonna play a free gig, and a few days ago we let you in on how to ‘Radiohead’ an album, now they’ve launched Nude as the next single from their In Rainbows album.

Whatsmore, it will be backed up by new b-sides. Although you are probably saturrated with Radiohead, those which are not Internet users have probably yet to see the fuss which they’ve caused throughout the world, so don’t blame them; it’s just the natural way of making yourself heard by as most people as possible.

XL Recordings release Nude on March 31st as a 7″, CD and download. The 7″ holds b-side 4 Minute Warning and the CD boasts Down Is The New Up. If you bought the limited In Rainbows discbox set last year will recognise the b-sides as songs included on Disc 2.

But what seems to be really interesting here is that they will also be giving fans the chance to remix the song. Say what? I can DJ Radiohead around? Sweet! But how? Well details of that will be announced shortly.