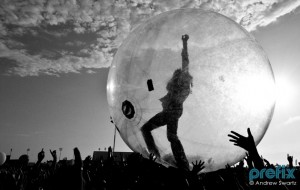 Ever heard of Dover, Delaware?

You know, the capital city of that first U.S. state, located just under Pennsylvania and New Jersey and cut off from Maryland by one clean eastern border…The one with Dover International Speedway, Silver Lake, a quaint, down-home feel…

In late July of this year (the 20-22, to be exact), more than 30 of the most prominent indie/alternative artists of today will be meeting up in Dover, Delaware, to play the young music festival known as Firefly.

Firefly is akin to most music festivals in that it spans three days and will be held in the outdoors; any age can attend, but it is required that one person over 18 accompanies every minor. It is highly similar to festivals like Woodstock (or Woodstock ’69 itself) in that camping on-site somewhere within the 87-acre field venue is permitted, although official hotels and other lodging houses are nearby.

Although self-hailed as “the East Coast’s premier music experience”, this festival is still new to the scene, as this will mark its first year…but, one glimpse at its lineup proves that it’s hardly wet behind the ears. Boasting artists like Jack White, the Black Keys, the Killers, Passion Pit, Death Cab For Cutie, the Flaming Lips, the Head and the Heart, and Grouplove, (among others), this festival comes on rather strong and is sure to hit the scene with more or less a scream-worthy explosion of blended musical genius. 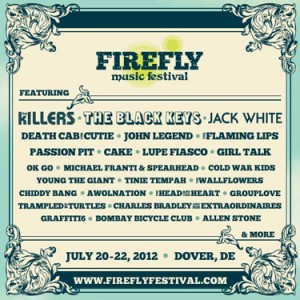 For more information about/tickets for Firefly (which are currently at $198 for regular three-day passes), check out their site.

With this line up, I think it’s time you head out to Dover, Delaware.