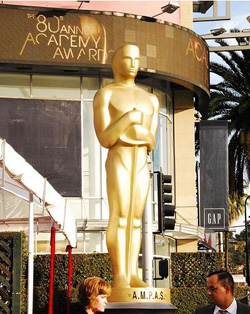 Were pretty fun. Wasn’t able to watch the event live, because of the whole time frame and stuff, it was something like 4 AM here when the Oscars aired. But I somehow managed to refrain myself from finding out the winners, as I find the element of surprise to create suspense and I love suspense; anyway I watched a rerun of the Academy Awards, a few hours ago. My general impression was somewhat favorable, maybe not so because it was too spectacular and so on, but rather because I’ve been following the Oscars every year since I was like 9 and thus I’ve developed a special place for it in my heart. I’m not being very subjective, but nevertheless I think most of us can agree it was a decent show.

I can always count on John Travolta and Jack Nicholson to make me laugh, terribly. This year’s In Memorium segment was also particularly touching, mostly because a whole industry was ravaged a few weeks ago, by the death of one of Hollywood’s most promising actors: Heath Ledger. The Coen brothers reigned supreme at the Oscars, picking up awards for Best Picture and Best Directors for No Country for Old Men. Daniel Day-Lewis won Best Actor and Marion Cotillard won Best Actress. Let’s turn our heads to the musical part of the event for a moment though, after all this is a music blog… 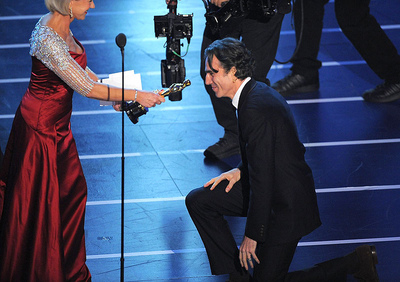 Daniel Day-Lewis accepting his first ever Oscar for best leading man in “There Will Be Blood.” Photo by MyCine.

Surprisingly or not, the winner of the Best Song section was won by Once‘s “Falling Slowly,” by The Frames’ Glen Hansard and girlfriend, Once co-star, and singing partner Marketa Irglóva. I was expecting one of Alan Menken’s and Stephen Schwartz’s songs to win, seeing how three out of the five nominations at the category were hold by the two. Well deserved trophy for couple Glen and Marketa nevertheless; and if you’re not convinced their live performance of the song, from yesterday night will undoubtedly make change your mind.