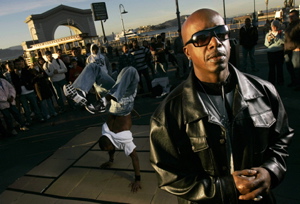 His true name is Stanley Burrell and he was the only one who could touch this. But he hasn’t topped the music charts since the early 1990s but he still is a huge name in the business.

Still he says that he has another hit on him – only this time around he’ll produce it as a Silicon Valley entrepreneur. He is choreographing a new career as co-founder and chief strategy officer of DanceJam.com. The website, scheduled to debut in mid-January, will try to upstage YouTube and become the Internet’s hub for sharing and watching dance videos.

Bankrupcy was a fact for him after he parlayed the popularity of his once-ubiquitous song, “U Can’t Touch This,” to become a pop icon in the early 1990s so he had to do something. But somehow everybody knows him and the tune and even children born after his downfall are familiar with his music because “U Can’t Touch This” still gets played in TV shows and movies.

But that is not going to help him a lot in the cruel world of technology. Ron Conway, a longtime Silicon Valley investor who is part of a small group that provided DanceJam with $1 million in startup funds stated the following “I expect him to integrate all his knowledge into this website,” said Conway, who befriended Hammer at a baseball game seven years ago and has been tutoring him in the ways of technology ever since. “He is the lightning rod for this whole thing.” Hammer recognized the value of that a long time ago; “When everybody started raving about the Internet, I always wondered, ‘If it’s so great, why can’t you see my videos on the Internet?’ ” Hammer said. “It looks like technology has finally caught up with my vision.”. We wish him the best of luck.

Update: Even the Hammer has a career in music. You can too but you’ll need to know which career is best for you. Head over to www.careersinmusic.com and take a look at their new Music Career Finder. Its designed to help you find the perfect music career based on your skills and what you’re into. The site lists over 100 music jobs with complete details such as salary, details on getting started and more. If you think going to music school would be cool, they list around 1,000 music schools, complete with info about each school as well as links to each schools Facebook pages. This site is a killer resource and one you should check out.