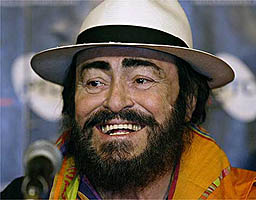 About two weeks have passed since the Italian legend named Luciano Pavarotti left us and the world is still not used to that idea. His fans and people from every corner of the world go and listen to his recordings or watch bits from the opera. But for some there are more pressing problems. Like his money.

His second wife has an attorney named Giorgio Bernini and he has stated that in the final months of his yearlong battle with pancreatic cancer, Pavarotti made two wills. One dated June 13 divides up his assets according to Italian law, with half going to his wife, Nicoletta Mantovani, and half to his children. The second, dated July 29, elaborates on the first and concerns the tenor’s U.S. holdings, which he entrusted to Mantovani, Bernini said.

The wills were made public this week after Mantovani’s lawyers formally requested that they be opened. The Associated Press confirmed the contents of the documents in interviews with Mantovani’s lawyer. Bernini said that according to the June 13 will, half of Pavarotti’s estate will go to Mantovani, and half will go to the daughters, each of whom get an equal, one-quarter share. “The Maestro’s concern has always been not to treat his daughters differently,” Bernini said.

The artist has given $693,350 to two of his friends for “for their affection and loyal assistance,” from his estate which is about $275 million; Bernini said such figures were exaggerated and that the tenor had no hidden “treasure” as some reports have also suggested. His legacy and artistical value is far beyond that; hopefuly that will not be forgotten.