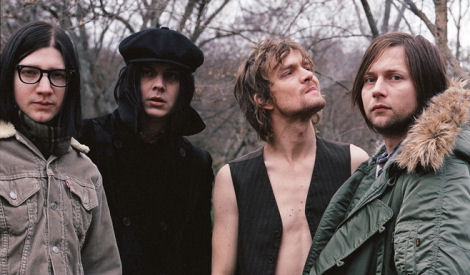 A peculiar conversation went on earlier today, at [tag]The Raconteurs[/tag] MySpace profile, between band members [tag]Jack White[/tag] and Brendan Benson. The conversation revolved mainly on the band’s future LP, but also sidetracked a bit on some hilarious lines about drugs, merchandising and the omni-present fear for L.J. ( ‘Little Jack’ Lawrence – the band’s bassist player). The conclusion, if existing, is that they’ve started writing and recording a lot of songs, that are different anything you’ve heard before and very difficult to describe, as difficult as ‘dancing about architecture’ or ‘singing about girls’. Check out the White/Benson dialog after the jump.

brendan: jack why don’t you want to tell people about the new album we’ve got cooking?

jack: I’ll tell them when the time is right.

brendan: what time is it right now?

brendan: but the clock on the wall says 2:10

jack: ok, the time is right. The teurs have a lot of new songs in the works people, the writing and structure of them has dissipated and reinvigorated and many times over since we came home from our last shows.

brendan: We got into the studio as soon as we could, or as soon as l.j. would let us.

jack: yeah, matter of fact little jack won’t let us do much without his blessing. and trying to get his blessing is like draining blood from a stone.

Brendan: is that why the recording sessions were “drug fuelled”, jack?

jack: I was just kidding when I said that brendan, don’t believe everything you read. fact of business; don’t even believe all the things I tell you when it’s just you and me in the room. If little jack’s there though, then it’s all true.

brendan: well, if you consider acidopholous powder a drug, then yes the tank is full of fuel!

jack: if I was to ever take a drug for pleasure, I would want that drug to be aspirin for all the headaches I get from second hand acidopholous powder and flax seed smoke.

brendan: what about the songs man? Are you with me?

jack: look b, I know that you and patrick are starting a two piece band on the side.

brendan: who told you that?

jack: L.J. did and we’re both fine with that, but as a penalty legion and I have decided you’ll be forefiting any and all t shirt profits for the period extending to, but not including, January first 2093.

jack: but as we were saying, the new songs are coming together strong, I hate to even attempt to describe them…

jack: or singing about girls.