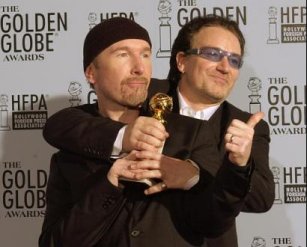 They have been known for doing surprising things before. This time they went and sang as a warmup act at a charity concert in London. But just Bono and The Edge were there.

The band members have invested time and money in good causes and it is obvious that charity is an important part of them. The show delighted the 250 people who attended the fund raiser on Friday night for Mencap, a charity that campaigns for equal rights for children and adults with learning disabilities.

“Don’t tell Larry (Mullen) and Adam (Clayton) we’ve done this,” Bono joked about his other two band mates from the small stage at London’s Union Chapel. The people were very happy to see them. A member of the audience, Simon Dowling, 20, from Newcastle, northern England, said he was shocked when the U2 stars suddenly appeared on stage. “I’ve used all the battery on my phone taking pictures of them,” he said.

They sang “Stay,” “Desire,” “Angel Of Harlem” and “Wave Of Sorrow,” a track written for their 1987 album “Joshua Tree.”. This appearance is noticeable and they have earned a thumbs up. Videos after the jump