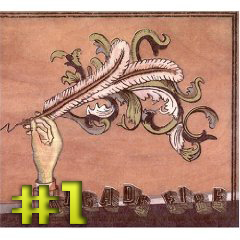 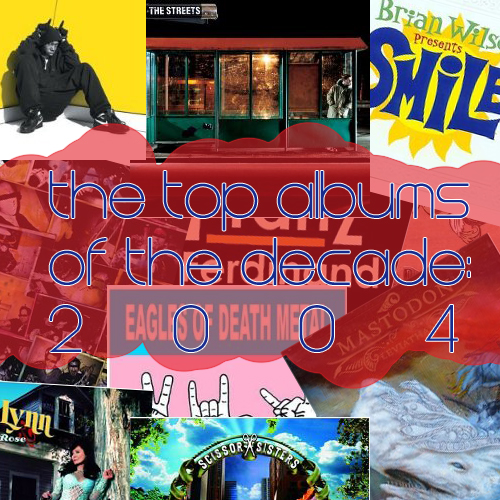 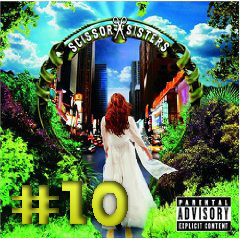 Like seeing Barcelona play soccer in their homeground, listening to the Scissor Sisters’ eponymous debut album was all about experiencing a showy spectacle in Nu-Camp. Do you see? As much as it sounds like laxy journalism (Who, me? Never!!!) it doesn’t get any better than the singles, and there were many. The impeccable glam brilliance of “Take Your Mama Out”; the questionable-but-validated bravery of a glitzy, sexed-up cover of “Comfortably Numb”; the kitsch fun of “Filthy/Gorgeous” and “Laura”. A co-lead singer named Ana Matronic. Everything about the Scissor Sisters’ arrival on the scene made them a very easy group to love. Never mind that their second album failed to do anything interesting – or that Take That later took their template for a pop song and perfected it on “Shine”. Instead, revel in an album unashamed to pull on its nostalgia trousers and indulge in some catchy 70s fun. (Al Byrne) 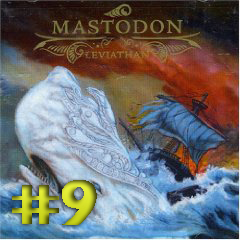 Imagine trying to explain this to your friend who doesn’t listen to metal. “It’s a sludgy/proggy metal album that tells the story of Moby Dick.” Huh? Honestly, though, it isn’t any more ridiculous than any other tale Mastodon has told. At least Leviathan has a coherent narrative (ahem, Crack the Skye). Fittingly, the album is Mastodon’s most paranoid. Witness the opening lyric: “I think that someone is trying to kill me.” It’s pretty damn hard to create the feeling of seasickness with music, yet Mastodon does it with ease. The chorus for “Blood & Thunder” alone violently throws your mind back and forth. All pretension aside, Mastodon albums are great for one thing: breaking shit. And there isn’t an album they’ve put out that accomplishes this more effectively than Leviathan. Just look at the advice from “Iron Tusk”: “Assault with all martial rage/ Sail on.” (Steve Lampiris) 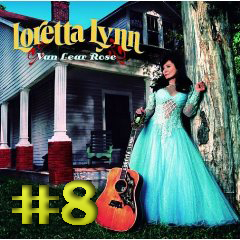 The thing about Nashville country stars is that they never seem to age. Just take a look at everybody’s favorite coal miners’ daughter, country idol Loretta Lynn. Aged 69 at the time she released her universally acclaimed stunning return “Van Lear Rose”, under the close supervision and tight production of White Stripes’ Jack White, Loretta’s voice sounds as soothing and clean as it did 40 years ago. It all came to be when the White Stripes dedicated their third album, “White Blood Cells”, to Loretta, after which a collaboration based on mutual respect between two icons of discrepant generations soon followed. There’s no secret Jack White is a terrific musician, but what he doesn’t get enough credit for is for being a fantastic producer as well. Classic bluegrass, foot-stomping barn anthems, heart shattering sing alongs, it all comes together magically and very intimately, making the listener feel like he’s 10 feet away from the stage. “Portland, Oregon” is maybe the sweetest duet I’ve been graced enough to hear in ages, perfectly exemplifying the breached gap between White and Lynn.  “Mrs Leroy Brown” is pure barn stomping goodness that will make even you city folk dance around silly, all on Loretta’s queue “I just drawed all your money out of the bank today/ Honey, you don’t have no mo’.” (Tibi Puiu) 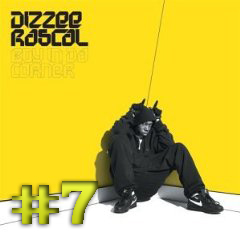 In the early to mid 2000s the shortly lived Garage current was withering and dying of a painfully pathetic death – a scene sprinkled with shameful acts, turning towards sellout nu-R&B territory. It wasn’t until breakthrough acts like The Streets and the phenomenal Dizzee Rascal surfaced and revitalized the scene. Dizzee Rascal, by his real name Dylan Mills, was only 18 when he released his chart braking, insatiably fresh debut “Boy In Da Corner.” Dizzee repeatedly stated in interviews that  his sole purpose in life is music, and to an extent his life attests this. Classic story: talented young man, surrounded by poverty, drugs and crime in an East London ghetto, beats the status quo and escapes all of it. His music goes well beyond this, however. First up, the beat revolves at around 90BPMs (more hip-hop than grime), but the loops, breaks repetitions makes it soulless, zero. If you show emotions, you’re weak. If you show attachment, you’ll be trampled on. Then Dizzee steps in and mashes his rhymes with an incredible flow, packed with an inimitable Brit East London slang and witty  lyrics. No, this isn’t hip-hop. It’s not grime either – it’s the future, if I’m to cite Mike Skinner. “I Love U” is Dizzee’s portrayal of love in the slums, underage sex with mordant wit: “Pregnant? What you talking about that for? 15? She’s underage, that’s raw.” “It’s real out here,” states Dizzee in  “Do It,” a gripping track that tells a lot about growing up way too fast, in a wacky, cruel world. (Tibi Puiu)

The Streets – A Grand Don’t Come For Free (Vice/Atlantic)

Nobody but Mike Skinner could have pulled this off, particularly on his second album. Rather than simply make another collection of allegories and anecdotes awkwardly rhymed and spewed over electro beats and vibes that was his debut “Original Pirate Material,” he decided he would create a narrative where he plays a character based closely on him. It comes off like an hour long after school special where the only lesson we learn is that life sucks, but at least money and drugs can dull the pain, right? Skinner guides us through a few months in the shite life of our hero with dark humor, outstanding storytelling, and even a few pop hooks (“Fit But You Know It”, “Not Addicted”) to tide us over. Against all odds, it’s tender and heartwarming. Only Mike Skinner could have pulled that off. (Ty Williamson) 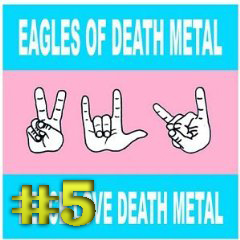 Jesse “The Devil” Hughes is a one-man rock& roll machine. It doesn’t hurt that Josh Homme, the one-man reason that metal is still relevant in the world of pop music, is in his corner. “Peace, Love, Death Metal” is exactly what you expect, if you didn’t actually think this band played Death Metal. It sounds exactly as you’d expect an album to with a song entitled “Whorehoppin’ (Shit, Goddamn)” among the track list. It plays boozy, laid-back, and reverent for all of the blues, rock, and blues-rock traditions, surpassing the quality of much of that sub-genre. Naturally, it’s pretty self-indulgent at times, just the way we used to love our rock n’ roll. (Ty Williamson) 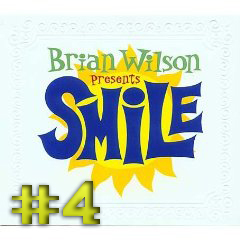 There’s a good chance that our readers (as well my fellow writers and editors) know a part, if not all, of the story behind this album. Thus, I can sum up the history and accomplishment of Smile with the following thought: Brian shoulda called it Miracle. The near-mythical status of this former Beach Boys album, the, um, gestation period the album went through, the fact that it actually hit store shelves in September 2004 – it’s all by the grace of some cosmic entity. If it isn’t, the music contained within certainly is. The glee-filled baroque of “Heroes and Villains” is argument enough. His new take on “Good Vibrations” which, aside from the missing BB’s harmonizing, is as fascinating and brilliant as the original, as well. It’s definitely not Pet Sounds, but by the standards of 2004 – and, really, the whole decade – it just might be the best pure pop album of the last ten years. (Steve Lampiris) 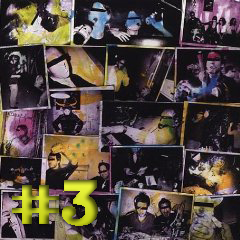 What gets lost amongst all the talk of Hold Steady frontman Craig Finn’s masterful way with words is the muscular music backing him up. Their debut album is packed with memorable musical passages: Tad Kubler’s exuberant guitar solo on “Most People Are DJs”; the rollicking sax on “Hostile, Mass.”; the glorious breakdown in “Sweet Payne”. But in reality, yes – it is mostly about Finn’s lyrics. Punk poetry; mid-western mythologies; suburban storytelling. From the potted history of the 20th Century in “Positive Jam” to the insane character sketch “Knuckles” to the love song to love songs that is “Certain Songs”, he’s at once hyperliterate and hip.
But it’s songs like “Hostile, Mass.”, “Sweet Payne” and “Killer Parties” that stand out, because it’s here that we’re introduced to Holly, Charlemagne and Gideon – three very important people we’ll come to know even better after Separation Sunday. (Al Byrne) 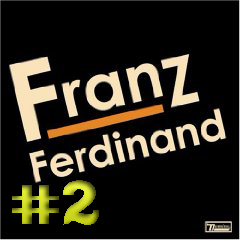 It is arguable that Franz Ferdinand were the biggest breakthrough of 2004, but there is no doubt that they were the pioneers of the art-rock revival. It seems so long ago now that ‘Take Me Out’, the stomping hit single from their debut, was consuming airwaves and playlists. Perhaps this is due to the fact that Franz created a somewhat short-lived movement; although it was one that captured the spirit of the times. A plethora of indie-guitar bands took on their spikey guitar sounds and tried to follow suit, but there was no keeping up with these slick and finely-tuned Glaswegians. A winner of the Mercury Music Prize, surely they will never see the likes of 2004 again. (Conor O’Brien)

We may have had our fair share of one hit wonders in 2004 – as well as our fair share of one album wonders – but every so often our generation is fortunate to be blessed with truly groundbreaking music that will be remembered for many years to come. ‘Funeral’ was a musical milestone of the decade and saw a mildly-eccentric seven-piece from Montreal break through into commercial stardom, and to never look back. With beautiful and seamless combinations of accordions, mandolins, electric guitars and catchy riffs, this album came with plenty of appeal for all tastes. Being voted no.2 on Pitchfork’s 200 Top Albums of the 2000s, only pipped to the post by Radiohead’s ‘Kid A’, says a lot. (Conor O’Brien)