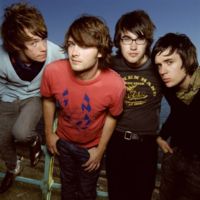 The welsh quartet [tag]The Automatic[/tag] have revealed details concerning their first upcoming US headline tour, in support of their recent new record “Not Accepted Anywhere“.

The band will begin touring North America from July 26, when they can be seen at NY’s Bowery Ballroom, after which they will cross country the US, make a stop in Toronto’s Mod Club on August 1, before finally calling it closed on August 8 when they will be playing their tour closing performance in Cincinnati OH 20th Century Theatre.