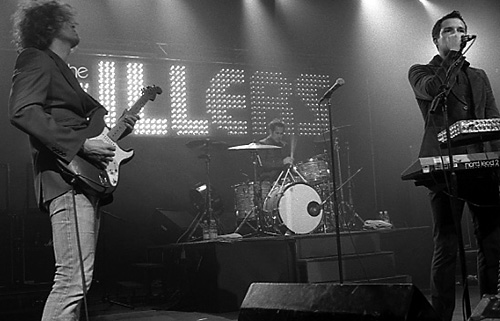 Last year’s “Day & Age” LP by the Vegas gang, The Killers, was disappointingly mediocre; a blunt collection of dull and uncatchy pop songs, with a one or two exceptions of course. As a Killers fan, I became a bit dishearten of the band, but I then remembered I have two other, almost perfect pop albums to rock of to – “Hot Fuss” and “Sam’s Town”. With this in mind, I’ll just think of Day & Age as a “small” slump in their repertoire and will just wipe it off my memory (and iPod, mind you).

So, all those Killers fans out there, do not fret, for the band will still light up our lives as they travel around the world on their latest tour – just pray they don’t play too many Day & Age songs. Ok, I’m done with Day & Age, that’s the last me of talking about it. Back to the tour. It seems the band is booked with gigs starting mid-January, ’till pre-summer, in May. The first leg will be comprised of shows staged in Europe and Australia, with M83 as opening act, while the second leg of the tour will see band play in North America, starting mid-April. The opener for the second leg is yet to be announced.

Wooo! Quite a large amount of gigs…