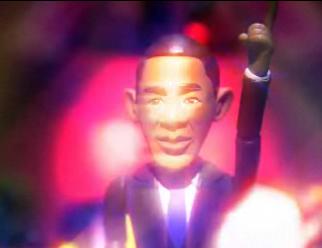 On January 20th, after a very turbulent year of 2008 and some even more gruesome 8 years before, finally the newly elected President of the USA, Barack Obama, will be officially inaugurated. We’ve seen a lot of tributes in his honor by various bands,  be it songs or whole albums, especially in late 2008, but the bellow video just hits the spot. It’s made by an indie team of directors, with various puppets walking about, including President Obama, along with various special effects, all wrapped up around Adam Freeland‘s remix of Aerodynamic by Daft Punk.

Here’s the description on the vimeo video:

“The following is a mixed-media stop motion music video and celebration commemorating the election and inauguration of Barack Obama as the forty-fourth president of these United States. Audibly showcasing Adam Freeland‘s remix of Daft Punk’s “Aerodynamic” and the imaginative stylings of forward thinking toy artists Dalek, Bill McMullen and Kubrick to name just a few. Independently animated and directed by the progressive minds of the directing team GOLD, the piece is a labor of love that invites everyone to join in or create their own celebration this coming Tuesday January the 20th.”

Update: This is lameass. I forgot to add the video and published it without it. Sorry, folks!