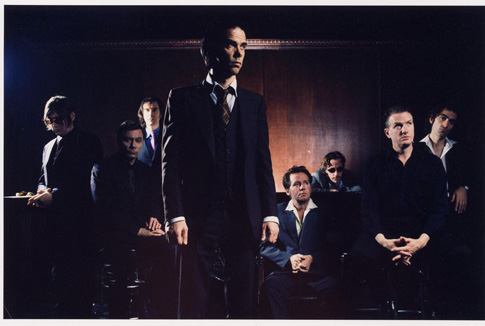 Here’s a feature about [tag]Nick Cave[/tag] we know you’re all gonna dig, after all with a hip name for Nick and The Bad Seeds‘ forthcoming 14th album like “Dig, Lazarus, Dig!!!” you can’t go wrong.  The official tracklist was reveled just recently, as well with a US release date of April 8, one month after Dig lands on UK soil on March 3 via Mute. The first single is set to be title track (I’ve written enough digs for one day) and is expected to hit stores February 18; you can stream it at the band’s website. It’s nothing spectacular, the band retaining their usual playing style and sound, but Nick Cave’s vocals are always a treat to listen, no matter how many times. Bellow you can find a few words layed down by Nick, explaining a bit on how this latest album came to be and influences:

Ever since I can remember hearing the Lazarus story, when I was a kid, you know, back in church, I was disturbed and worried by it. Traumatized, actually. We are all, of course, in awe of the greatest of Christ’s miracles – raising a man from the dead – but I couldn’t help but wonder how Lazarus felt about it. As a child it gave me the creeps, to be honest. I’ve taken Lazarus and stuck him in New York City, in order to give the song, a hip, contemporary feel. I was also thinking about Harry Houdini who spent a lot of his life trying to debunk the spiritualists who were cashing in on the bereaved. He believed there was nothing going on beyond the grave. He was the second greatest escapologist, Harry was, Lazarus, of course, being the greatest. I wanted to create a kind of vehicle, a medium, for Houdini to speak to us if he so desires, you know, from beyond the grave. Sometimes, late at night, if you listen to the song hard enough, you can hear his voice and the sad clanking of his chains. “I don’t know what it is but there is definitely something going on upstairs”, he seems to be saying. It is, most of all, an elegy to the New York City of the 70’s.

The  physical version of the Assassination of Jesse James by the Coward Robert Ford soundtrack Cave crafted with fellow Seedy character Warren Ellis is also due to land in the U.S. February. Keep a keen eye on future news as Nick and co. are more then certain to announce details for their upcoming tour. Bellow, the tracklist for Dig, Lazarus, Dig!!!: