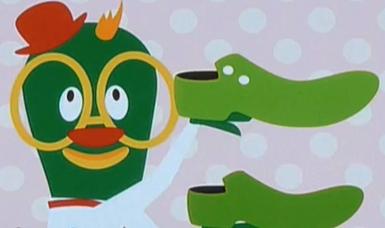 If only had to use one word to describe Les Savy Fav‘s latest brand new song, titled “Shoes” and recorded for kids show Yo Gabba Gabba, then it would definitely be awkward. Hey, don’t get me wrong, they’ve made plenty of crazier stuff, but it’s this new cute side of theirs, which the band just unveiled as part of their soundtrack for the latest YBB episode, that really freaks me out. Even frontman Tim Harrington seems to agree with me, to some extent. The band itself hasn’t been featured in the episode visually, but the animation soundtracked by Shoes does well to mirror a bit of their spirit. Heck, it’s like watching a Les Savy Fav live DVD. Oh, and who will ever be able to forget these soon to be timeless lyrics “Shoeeeeeeeeeees/I have a new pair of shoes/Shoeeeeees/I have a new pair of shoes/Shine and clean/They’re my favorite colour – green/Shoeeeeeees/“.