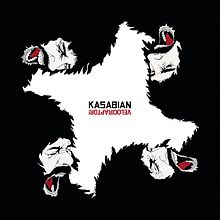 Comparisons have always been rife between Kasabian and Oasis but the Leicestershire band has moved one step closer to the legendary Mancunians with their latest record.

Much like the majority of the sane population, Kasabian’s Sergio Pizzorno admitted to all but worshipping Noel Gallagher in the ‘90s as Oasis established themselves as the finest artists of a generation, claiming “he inspired me more than any teacher or historical figure”. Pizzorno had the honour of conducting last season’s FA Cup Third Round draw alongside his idol. Coincidently, their respective favourite clubs were drawn against each other, resulting in a warm embrace between the two musicians. Their bands have toured together and there were fleeting rumours of Gallagher joining Leicester’s finest shortly after Noel and Liam went their separate ways as Oasis split in 2009. Clearly they are appreciative of each other’s work and the similarities between their music are becoming ever-more apparent.

Velociraptor! Kasabian’s fourth studio album has a lot to live up to as the band’s stock seems to rise year on year, particularly after the whirlwind success of West Ryder Pauper Lunatic Asylum which was shortlisted for the Mercury Prize amongst other achievements.

The YouTube releases, Switchblade Smiles and Days are Forgotten appear to be something of a false flag upon listening to the album as a whole. The singles are typically Kasabian because of the heavy club beats that have become synonymous with the band, and could easily slot into any of the three previous albums. However, they are something of an exception to the rule this time around, as ironically, the colossal, prehistoric title juxtaposes a far softer, melancholy selection of tracks. The pretentious cynics would callously discard it into the pile labelled ‘sell-outs’ due to its greater aesthetic appeal to the masses, but as alluded to earlier, there is a more prominent Oasis-esque sound emanating from Kasabian’s most eagerly anticipated release yet, and nobody can complain about that, surely?

Velociraptor! opens in unorthodox fashion with a refreshing brass influence complementing said trademark, dinosaur-sized beats in Let’s Roll How We Used To. Further irony there, considering the new path the band are looking to explore in this album but it’s a good track about their younger days: growing up in “the booze and the fags generation.”

The next stop on the Jurassic journey is a couple of borderline ballads; Goodbye Kiss and Absinthe (let’s call a spade, a spade shall we?); the latter being my favourite track on the album. It’s an unenviable task to successfully change direction and break the parameters of genre but here, Kasabian have hit the nail on the head. Lyrically, it’s pretty good considering some of the garbage they have spouted in the past (and on the title track of this album: “Velociraptor! He’s gonna find ya, he’s gonna kill ya, he’s gonna eat ya!”) and the soothing melody is a welcome contrast to the aforementioned singles, as is the closing track, Neon Noon which is another brave move that looks to have paid off.

Maybe I’m too contemptuous but it annoys me when albums are seemingly just chucked together. As far as I’m concerned there should be some sort of concept, lyrically or otherwise, throughout and Velociraptor! is a bit too varied. Whilst it’s admirable to create a record consisting of a number of themes, I resent the idea of talking about dinosaurs, schizophrenia, alcoholism and whatever switchblade smiles are, all in the same album.

Lead vocalist Tom Meighan holds some notes well, particularly in the opening track and Man of Simple Pleasures drawing comparisons yet again to a certain Manchester-born icon. He does a sound job overall but unsurprisingly can’t quite make you fall in love with the tracks like Gallagher did during his heyday. It’s a good album, and Kasabian are certainly heading in the right direction by broadening their horizons like they have done.

I’d consider Velociraptor! very similar to Linkin Park’s A Thousand Suns released last year, that somewhat traded in their emo reputation for a softer, contemporary outlook. Some critics didn’t like it but I found it endearing. As I said, moving out of your comfort zone is a bold move. We’ve seen it backfire horribly in the past; Lil Wayne’s laughably woeful attempt at a rock album, Rebirth, being the pinnacle. Alas, Kasabian deserve credit for a solid fourth album.

Undoubtedly an excellent modern-day band, streaks ahead of the competition, but even with this impressive contribution, they’re still some way off the level they may aspire to reach. An all-important fifth album may well be telling.

So I'm Tom. I'm a student. Guess what? I listen to music now and then. We're not so different it seems. Not pretentious enough to dismiss anything mainstream, not narrow-minded enough to listen exclusively to the charts. I also write about football. Check me out if you fancy it; I'm all over the web.

View all articles by Tom